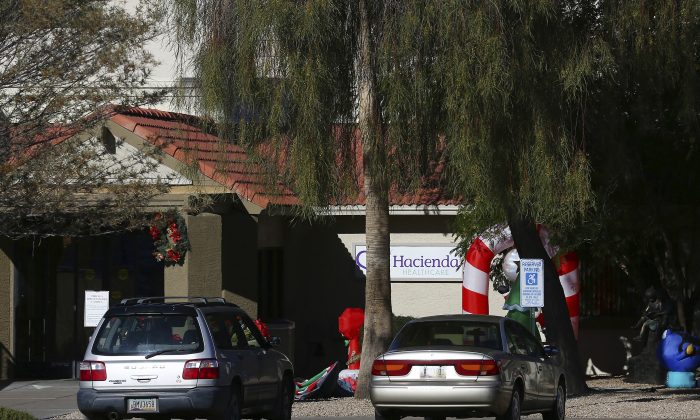 Hacienda HealthCare in Phoenix, Arizona on a Jan. 4, 2019. A woman in a vegetative state gave birth in a Hacienda facility on Dec. 29, 2018, prompting a sexual assault investigation. (Ross D. Franklin/AP Photo)
US News

The Phoenix Police Department served a search warrant to obtain DNA samples from male staff members at Hacienda Healthcare, where a woman in a vegetative state gave birth on Dec. 29, 2018.

The warrant on Jan. 8 was part of the department’s probe into how the woman got pregnant, according to a press release from Hacienda.

“As a company, we welcome this development in the ongoing police investigation,” the company stated in the release, reported the Arizona Republic.

Hacienda said that it had considered asking employees for DNA but that attorneys advised against it, believing it would violate federal law.

“Hacienda stands committed to doing everything in our power to bring this police investigation to a quick conclusion,” the company statement said. “We will continue to cooperate with Phoenix police and all other investigative agencies to uncover the facts in this deeply disturbing, but unprecedented situation.”

The Phoenix Police Department declined a request to comment. Apart from confirming that officers are investigating the case, the department has not released any information on the case.

An attorney for the family of the vegetative woman said on Tuesday that the baby boy is healthy but it’s not clear who currently has custody of the child, reported KPHO.

The woman has not been named but she’s been described as a 29-year-old Native American woman who has been in a vegetative state for 14 years after nearly drowning.

The San Carlos Apache Tribe, located in southeastern Arizona, said on Tuesday that the woman is an enrolled member of the tribe.

“On behalf of the Tribe, I am deeply shocked and horrified at the treatment of one of our members. When you have a loved one committed to palliative care, when they are most vulnerable and dependent upon others, you trust their caretakers,” Chairman Terry Rambler said in a statement.

“Sadly, one of her caretakers was not to be trusted and took advantage of her. It is my hope that justice will be served.”

“I know Chief Jeri Williams and the Phoenix PD Officers will do all they can to find the perpetrator,” he added.

“None of the staff were aware that she was pregnant until she was pretty much giving birth,” a source told KPHO. “From what I’ve been told she was moaning. And they didn’t know what was wrong with her.”

The organization cares for more than 2,500 across all of its facilities.

According to federal records, the healthcare facility where the woman gave birth has at least 74 patient beds. Like the Native American woman, some patients have been there for 10 years or longer, even decades.