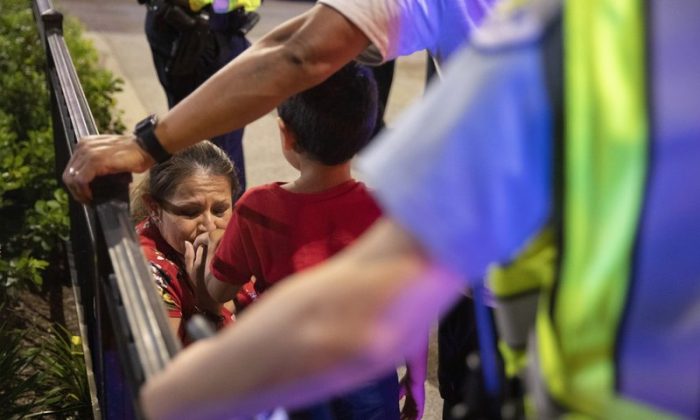 Chicago Police Department (CPD) officers stand guard while a woman relieves her son who had panicked after reports of stabbings and threatening injuries after the 4th of July celebrations at Chicago's Navy Pier. (Amr Alfiky/Photo via AP)
US News

CHICAGO—A stampede at a Fourth of July fireworks display that injured more than a dozen people at Chicago’s Navy Pier started when a private security officer shouted for bystanders to take cover, police said Friday.

Chicago police spokeswoman Kellie Bartoli said “approximately 13” people who fell or were trampled during the ruckus were hospitalized with minor injuries. The rush of people occurred shortly after a brawl that resulted in at least two stabbings.

The incidents happened just after 10 p.m. as thousands crowded Navy Pier on Lake Michigan’s shoreline. Police said they were searching Friday for two male suspects in the stabbings.

Authorities speculate that shortly after the stabbings, someone exploded a firecracker near a group of people, prompting shouts of “gun” or “shots fired.” Chief of Patrol Fred Waller told a news conference Friday that the ensuring panic was fueled by warnings to bystanders to take cover shouted by a member of a private security firm employed by Navy Pier.

Police Superintendent Eddie Johnson said that despite the fracas, the officer’s warning was appropriate.

“If you’re going to make an error in judgment, we want to err on the side of caution,” Johnson said. “Suppose there had been an active shooter, and he had said nothing?”

Police say a false report of gunfire set off a stampede that trampled more than a dozen people at Chicago’s annual July 4 fireworks display at Navy Pier (July 5)
Chicago police tactical and SWAT teams that provided the main security for the fireworks show, backed by covert state and federal law enforcement officers, responded by searching the area but found no gunman.

The private security firm was not identified and Navy Pier officials did not respond to a request for comment, but issued a statement that said Thursday’s “unfortunate isolated incident” was quickly managed by security teams and law enforcement officers.

“We are continuing to work with the Chicago Police Department on this matter and to ensure that we are doing all that we can to keep people safe while they are visiting the pier,” the statement said.

A 30-year-old man not involved in that altercation suffered stab wounds to the face and arm but said he did not see the offender nor did he remember any details about the incident, Bartoli said. He was at Northwestern University Hospital in stable condition.

Also, police said a 16-year-old boy, initially thought to have been stabbed, sustained a puncture wound to his leg after running into a table.

Those who were injured while running or falling in the commotion were taken to hospitals with non-life-threatening injuries, said another police spokesman, Rocco Alioto.

Rachel Schar, who’s a server at the waterfront restaurant Harry Caray’s Tavern, said that during the ensuing panic, crowds of visitors swarmed the restaurant for at least 10 minutes to escape what they believed was an active shooter.

“It was pure chaos,” the 22-year-old told the Chicago Tribune. “I literally thought I was going to die.”

Schar said she was collecting credit cards from a party table when she heard screaming, shoes rapidly pounding the pavement, and shouts about a gun and people stabbed outside. She said she was tackled during that pandemonium and then sprinted upstairs into an office.

Elsewhere in the city, the typically violent July Fourth holiday had already seen 35 people shot, five fatally, with three days to go in the weekend. Mayor Lori Lightfoot, who took office in May and has made curbing gun violence a priority, followed recent years’ practice by adding an extra 1,500 police officers onto the streets. Messages left with her press office Friday were not immediately returned.

Johnson said his staff monitors crime statistics hourly and said this year’s numbers “are up a little bit, but let’s let the rest of the weekend play out.”