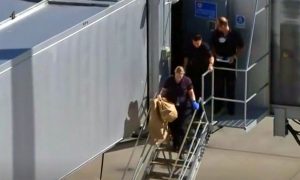 Police in Pennsylvania are searching for the parents of an “hours-old” newborn baby girl who was found abandoned but unharmed on a porch in Philadelphia in mid-90s heat this week.

The newborn was found fast asleep at about 1 p.m. on July 30 wrapped up in a swaddle, according to Upper Darby police.

Terrell Philips, who reportedly lives in the area, told NBC Philadelphia he saw the baby girl on his neighbor’s porch in Upper Darby Township in a little white blanket with her umbilical cord still attached.

“She was sleeping,” he said. “No crying. Very quiet. She was just there. When I picked the baby up and opened the towel up, the baby still had the umbilical cord on her.”

Philips told the outlet that he initially thought the child was an animal but called 911 straight away when he saw an arm and realized it was a newborn.

Baby is being evaluated and is doing okay.

The owner of the home where the child was found told the outlet that she didn’t see her when she went outside around 9 a.m., which suggests the baby could have been left on the porch in extremely hot temperatures for hours before she was discovered by Philips.

“Thank God the baby is OK,” Police Superintendent Mike Chitwood told ABC News. “But to put a 6-hour-old child on a porch wrapped in a blanket is insane, in my opinion. It was 93 degrees yesterday.”

Upper Darby police are now urging the public for help in locating the newborn’s parents.

“We need help locating the parents to get them the assistance that they need,” they said in a tweet. “Mom, if you’re reading this, call us.”

They added that under Pennsylvania’s Newborn Protection Act, also known as the Safe Haven Law, a parent of a newborn may leave a child in the care of a hospital or a police officer at a police station without being criminally liable, as long as the child is no older than 28 days and is not harmed.

The Newborn Protection Act (Safe Haven) states that a parent of a newborn may leave a child in the care of a hospital or a police officer at a police station without being criminally liable, as long as the child is no older than 28 days and is not harmed.

According to NBC Philadelphia, police said the child’s parents could face charges of reckless endangerment.

“If somebody wants to drop off a child to a hospital or police station, as long as it’s not hurt and less than 28 days, you can do it without any criminality,” Chitwood told ABC News.

The department added that it had received an “ influx of calls requesting information on how to adopt the baby.”

“While we appreciate the outpouring, of support the UDPD is not involved in this process,” police wrote in a tweet. “Please only call with pertinent information that may identify the family of the child.”

“Probably 98-percent of the phone calls that we’re getting are people who want to adopt the baby,” Chitwood told ABC News.

Upper Darby Police has urged anyone with information to contact them at 610-734-7693 or email socialmedia@udpd.org.