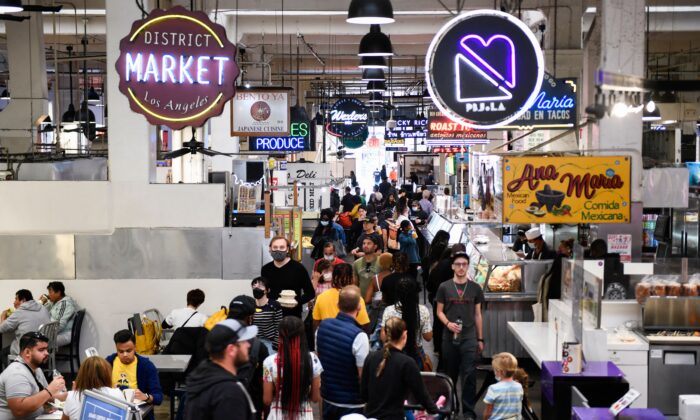 Customers browse food stalls inside Grand Central Market in downtown Los Angeles on March 11, 2022. Fears of stagflation in the U.S. economy are on the rise. Stagflation happens when the economy has slow growth, unemployment has risen to record heights, and prices are rising, or the country is in an inflationary stage.(Patrick T. Fallon/AFP via Getty Images)
Southern California

LOS ANGELES—Police are searching for a man who shot another man to death outside the entrance to the Grand Central Market in downtown Los Angeles, sending people inside running in fear and police on a hunt for the gunman.

The shooting was reported at 3:56 p.m. Saturday in the 300 block of South Hill Street, according to Officer Rosario Cervantes of the Los Angeles Police Department.

Paramedics took the wounded man to a hospital, where he later died, Cervantes said. His name was withheld pending notification of next of kin.

The gunfire sent panicked patrons running out of the market. The LAPD set up a perimeter and searched for the shooter. The perimeter was later lifted but the gunman remained on the loose.