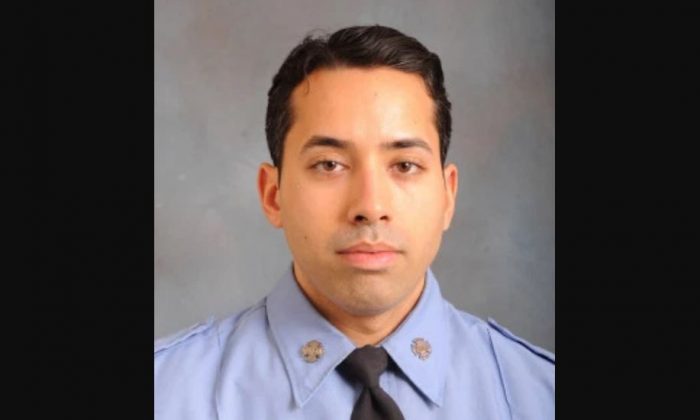 Bravest Faizal Coto, 33, was killed in an apparent road rage attack in the Brooklyn borough of New York City on Dec. 9, 2018. (FDNY)
Crime and Incidents

Police officers in New York City are hunting for a vehicle registered to a known gang member after the vehicle was one of two involved in an apparent road rage attack.

Early on Dec. 9, off-duty firefighter Bravest Faizal Coto, 33, who had been a firefighter for three years, was driving on Belt Parkway in Bath Beach when he encountered another vehicle.

Officials aren’t sure if the two vehicles made contact with each other or if one of the drivers cut the other off at some point, but soon enough Coto and the other driver had pulled over and engaged in a confrontation.

The argument turned physical and the other driver used an unknown object to hit Coto in the head. He also suffered puncture wounds that weren’t consistent with a car crash.

A witness called 911 and said they watched the exchange, which ended with Coto lying on the ground.

Police officers and medics rushed to the scene and Coto was taken to Coney Island Hospital but was pronounced dead.

“It’s a tragedy,” said Fire Department of New York spokesman Jim Long, reported the New York Post. “He was a young man who decided to dedicate himself and his life to serve others. Now he’s gone.”

Coto did not have any children but was engaged to be married, according to his Facebook page.

Police officers are now searching for the other vehicle and driver involved in the incident.

The vehicle is described as a 2006 silver four-door Infiniti sedan and has a New York license plate with JEA 2402 on it, reported CBS New York.

The sedan is registered to a known gang member. Neither the person nor the gang has been publicly identified.

The car was damaged on its front driver’s side.

Coto’s vehicle also had damage on one side. Police officers weren’t sure if either or both vehicles had suffered damage prior to Sunday.

The case is being investigated as a homicide.

Tributes to Coto poured in on his Facebook page, which identified him as a lifelong Brooklyn resident who graduated from Midwood High School and studied at Hunter College.

“This one is hard to swallow. Why??? Not a hint of malice, always smiling and spitting his love for others. He was proper, decent, and lovely, friend with all and a dream maker,” said Louis Rigaud Bois.

“I always enjoyed talking to him during my shifts back in residency. He was a Great guy, kind to everybody, genuinely nice person, talented, traveled the world, and tried to enjoy life. Always trying to better himself. My condolences to his family,” added Sammy Selahi.

“So young and handsome. A good man. My heart breaks for you and your family. RIP,” said Catherine Leonardo DeVinci.

“I miss you already my brother, this seems like a bad dream. It was too soon for you. You will always be among the best men I have known. Until we meet again my friend,” added Michael Anthony.