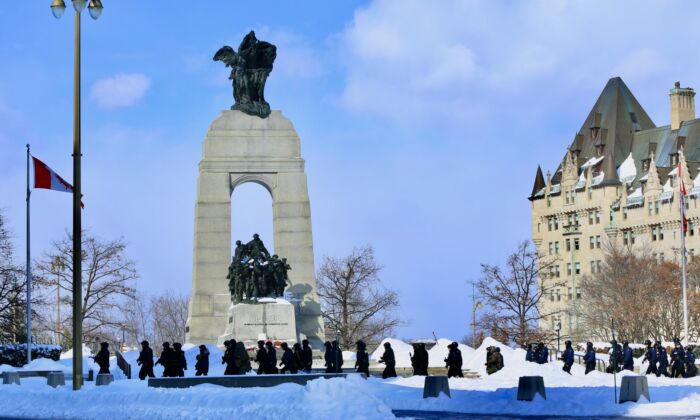 Police Say Woman Who Stood on Tomb of Unknown Soldier Not Associated With Convoy Truckers, Won’t be Charged

Ottawa police say the woman who stood on the Tomb of the Unknown Soldier on the first day of the trucker protest is not associated with the Freedom Convoy truckers. Police say she is unlikely to re-offend and won’t be charged.

“A woman who resides out of province was identified. She was spoken to, showed remorse for her actions and police are confident she will not re-offend,” says an email statement from the Ottawa Police Service (OPS) on April 29.

The OPS said because no criminal charges were laid, her name won’t be released.

Video footage of the incident on Jan. 29 shows the woman with a white winter jacket, black snow pants, and a toque standing atop the Tomb with a cup in her hand and yelling “Freedom!”

As she walks down from the Tomb she can be heard saying a typical French-Canadian curse.

“The woman is from Québec,” OPS spokesperson Carole Macpherson told Blacklock’s Reporter.  “There was no admitted association to the Freedom Convoy truckers.”

The Epoch Times asked the OPS if the woman knew she was stepping on the Tomb or if this had been done inadvertently to reach a higher ground to yell.

The OPS said given no criminal charges were laid, it’s limited in the information it can provide.

The isolated incident was decried at the time by military officials and politicians in condemnation of the protesters.

“I am sickened to see protesters dance on the Tomb of the Unknown Soldier and desecrate the National War Memorial,” tweeted Gen. Wayne Eyre, Canada’s Chief of Defence Staff on Jan. 29.

“Generations of Canadians have fought and died for our rights, including free speech, but not this. Those involved should hang their heads in shame.”

Minister of Defence Anita Anand retweeted Gen. Eyre’s message the same day with the comment, “The behaviour we’re seeing today is beyond reprehensible.”

The issue was studied by the House of Commons Standing Committee on Veterans Affairs (ACVA) and its committee report called on law enforcement to continue its investigations.

Authorities erected a fence around the War Memorial after the Tomb incident, but veterans participating in the protest later took it down of their own volition and proceeded to remove snow and ice around it.

During House of Commons debates on Feb. 17 on the invocation of the Emergencies Act by the government to clear blockades and protests, Public Safety Minister Marco Mendicino said “The individuals outside are tearing down the barriers to attack those monuments.”

The claim was false, among other false or unsubstantiated claims made by the minister surrounding the Freedom Convoy protest, such as that the protesters were linked to an arson incident, or that the individuals arrested in Coutts, Alberta, on serious charges had links to protest organizers in Ottawa.

The government’s strong response to the memorial incident stands in contrast to other protests that have seen severe damage to statues and other historic sites of significance. The federal government has not condemned such acts that have taken place across Canada in recent years during social justice protests targeting symbols of colonialism, such as statues of historical Canadian figures like that of John A. Macdonald, the nation’s first prime minister.