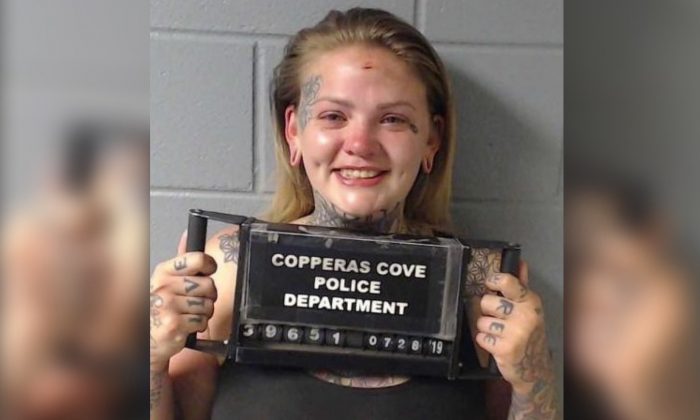 Samantha Vaughan, 26, was arrested after allegedly leaving her infant inside a running car while drinking alcohol inside a nightclub in Copperas Cove, Texas, on July 28, 2019. (Copperas Cove Police Department)
Crime and Incidents

A Texas mother was arrested in a Copperas Cove night club after allegedly leaving her baby in a running car while she went inside to consume alcohol.

According to local news outlet KWTX, 26-year-old Samantha Vaughan was discovered before 2 a.m. on Sunday, July 28, inside TrackSide, a Copperas Cove drinking establishment which one Yelp reviewer called an “old run down bar.”

Deputies found her baby in the backseat of a car, parked outside the club, according to an arrest affidavit seen by KWTX.

Vaughan told officers she was picking up her husband at the club and then ended up using the toilet and sitting “with him while she consumed the two shots.”

The mother, whose booking photo shows tattoos on her hands that read “Live Free,” allegedly refused to comply with requests by arresting officers and resisted being taken into custody.

She dropped to the ground, the report said, and then “continued to thrash her body around…yell and throw herself about.”

KWTX reported that throughout her interaction with officers, Vaughan yelled and cursed, including using a racial slur.

Police officers cited in the report also said the woman “smashed her forehead” into a steel bar inside the police vehicle two times, resulting in a forehead laceration.

Fox News reported that a breathalyzer test determined her blood alcohol level was 0.148. In Texas, a blood alcohol content of 0.08 is the threshold for intoxication.

Vaughan has been charged with abandoning/endangering a child with intent to return, according to the report.

Father Charged After 3-Year-Old Shot in the Face

The incident follows the case of an Illinois father charged after a 3-year-old boy who accidentally shot himself in the face.

Ronald Davis, 29, was charged with child endangerment and one count of unlawful use of a weapon by a felon, police said, according to CBS.

ABC7 reported that investigators believe Davis knowingly left a loaded gun in a place where it could be accessed by a child.

The little boy, identified as Mikah Davis, was shot in the face on Sunday, July 28, and died shortly after the shooting. Police found him around 4:15 p.m. local time at a home at the 9600 block of South Escanaba in South Deering, the Chicago Sun-Times reported. He was suffering from a gunshot wound to the face.

Authorities cited in the report said the child was rushed to Advocate Trinity Hospital, where he was later pronounced dead.

Police spokesperson Anthony Gugliemi initially indicated in a Twitter post that the shooting may have been an accident.

He recounted that the boy’s family had told police they heard a gunshot while in another room, only to then find the boy with a gun.

Gugliemi wrote that the Department of Children and Family Services had “also been called in to assist.”

Tragic news as this young child has succombed to injuries. Family reports to police that they heard a gunshot while in another room and found their child with a gun. We extend our deepest condolences as detectives continue to investigate. DCFS has also been called in to assist

A neighbor told the Chicago Tribune that she had seen a man and a woman run out of the home, and they were carrying what she deemed to be an unconscious child to a car before driving off.

“The parents walk out, run out, with their child and something was wrapped on his head. They just rushed to the car and left,” said neighbor Lizbeth Nunez, according to Fox 32 Chicago.

Another neighbor was cited by Fox 32 as calling the incident “devastating,” adding that “this is something you don’t want to see anywhere.”