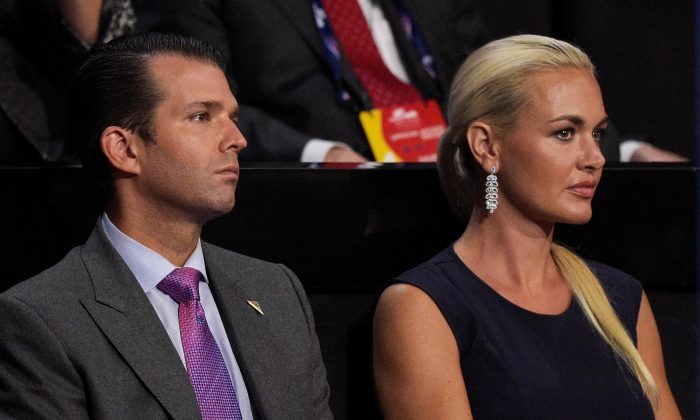 Donald Trump Jr. along with his wife Vanessa Trump, attend the evening session on the fourth day of the Republican National Convention at the Quicken Loans Arena in Cleveland, Ohio, on July 21, 2016. (Jeff Swensen/Getty Images)
Crime and Incidents

The New York Police Department revealed the content of the note received on Monday by President Donald Trump’s daughter-in-law.

Vanessa Trump,the wife of Donald Trump Jr., opened an envelope Monday morning that contained white powder and a threatening note. She was rushed to a hospital and was later discharged.

“You’re an awful person and now you get what you deserve,” the note said, according to a police source cited by Fox News.

Two other people were also taken to a hospital while a team of hazardous materials workers decontaminated the apartment.

NYPD later determined that the white powder was harmless. The New York Post reported that the material was cornstarch.

Trump Jr. tweeted about the scare later in the day.

“Thankful that Vanessa & my children are safe and unharmed after the incredibly scary situation that occurred this morning,” Trump Jr. wrote. “Truly disgusting that certain individuals choose to express their opposing views with such disturbing behavior.”

The Secret Service confirmed that they and other agencies are investigating the incident.

Vanessa Trump and Donald Trump Jr. married in 2005 and have five children.