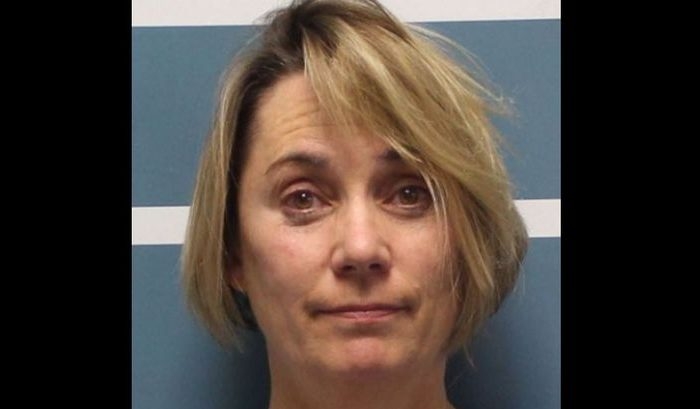 A California teacher told police officers that she was sorry that a student’s hair got cut but “it was already done.”

“She said that she had to do it for (the foreign exchange student) who had been acting like ‘a ding dong,'” a police report about the incident said. “She said that she was sorry that (the other student’s) hair got cut, but that it was already done.”

The exchange student is living at the house of 52-year-old Margaret Gieszinger, reported ABC 30, which obtained the police report.

The science teacher also told officers that what she did was not exceptional and that she got tired of “ridiculous behavior” by some of the students in her class at University Preparatory High School in Visalia, California.

The police officer writing the report also noted that the school’s principal was told after the incident by the teacher that she had a so-called haircut day because there had been issues in the class with cell phones.

When asked by officers if she knew how scary the incident was for her students, she replied: “I bet.”

Gieszinger was arrested after video footage of her cutting the student’s hair circulated widely.

An alleged video of the incident shows her calling a student over to a chair. The student then sits down and she lops off a piece of his hair while screaming the lyrics to “The Star-Spangled Banner.”

Later, the video shows the teacher pointing the scissors at another student before the class runs out of the room, screaming. The teacher is singing all the while.

Watch as frightened high schoolers run out of Margaret Gieszinger's chemistry class after she starts chasing after kids to cut their hair. This happened Wednesday morning at University Preparatory High School in Visalia. Students tell me this wasn't the first time Gieszinger had an apparent breakdown. More at 11 on ABC30 Action News

Lilli Gates, one of Gieszinger’s students, told the Visalia Times-Delta that what happened was unusual.

“When everything was going on I was terrified, and I so badly wanted to blame her. I was scared she was going to come back,” Gates said.

“What she did to my classmates and I is inexcusable. I am not trying to make excuses for her, I simply ask everyone to reconsider how they view her. She is a loving and kind lady. She is usually all smiles and laughs. This is not the Miss G. we know and love.”

According to the Commission on Teacher Credentialing, Gieszinger’s credential was suspended in 2007 and 2016; it’s not clear what prompted the suspensions.

Gieszinger’s husband was among those questioning his wife’s actions.

The boy in the video has not returned to school since the incident and his family hired an attorney, Mark Vogt, to explore a lawsuit against the teacher.

“He couldn’t believe what was happening. He frankly didn’t know what to do, and he thought to himself, me or anybody else, she’s coming for someone else. And then the video, of course, we see that later. But he was absolutely terrified,” Vogt told ABC 30.

School officials said that Gieszinger would not return to teach her science class.

The Tulare County District Attorney’s Office said (pdf) on Dec. 7 that Geiszinger was charged with six misdemeanors, including one count of false imprisonment, two counts of cruelty to a child, and two counts of battery. If convicted on all charges, she faces up to 3-and-a-half years in jail.

Gieszinger was released on her own recognizance during her initial court appearance but was told not to go near the high school and not to be around firearms, reported the Times-Delta. She also can’t go within 50 feet of three victims listed in the criminal complaint.