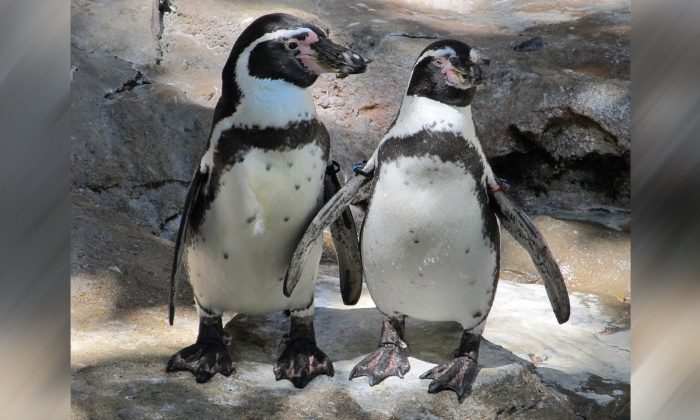 Police Remove 2 Penguins From Sushi Bar, Then They Come Back

Two penguins had to be removed by police from under a sushi bar in New Zealand—twice.

Police responded to reports of two little blue penguins nesting underneath a sushi bar near Wellington Railway Station on around 6:35 a.m. on Monday, July 15.

“The waddling vagrants were removed from their sushi stand refuge earlier today by Constable John Zhu,” the Wellington District Police wrote on Facebook. Police temporarily detained the animals before releasing them into Wellington Harbor, but they came back the same night, reported Radio New Zealand.

These little blue penguins had to be removed from under a sushi store near the Wgtn railway station, not once – but twice.
The two little kororā showed a complete disregard for police authority after being removed from under a food truck, and returning later in the day. 😍😍 pic.twitter.com/i728NRe0LP

The owners of the sushi shop across the harbor where the penguins were released, said the waddling birds came back Monday night.

“It’s pretty insane the idea that some penguins are camping out under your shop,” Wini Morris who works at the shop, Sushi Bi, told Radio New Zealand. “But it’s adorable I think―they’re probably terrified but it’s adorable.”

She said she heard the penguin pair making noises and believes they were keeping warm near the grills under the shop.

The Department of Conservation (DOC) removed the animals but said they will probably come back again, partially because they’re attracted to the smell of fresh fish from the shop and to the warm crawlspace underneath.

DOC Wellington operations manager Jack Mace said the penguins, which are common sites in the area, were probably looking for a place to lay their eggs for the wintertime, the radio station reported. Mace also warned the public to be careful around penguins because they could bite.

The bar owner used salmon to lure the penguins out from underneath their hiding spot, the news outlet reported.

#WATCH Two little blue penguins have been stealing headlines & hearts after been spotted waddling around Wellington.

The pair had to be removed from under a sushi bar near the train station not once – but twice.

After the penguins were first reported, Wellington police asked motorists to watch out for the animals which may be frequently crossing the road.

The DOC believes that the penguins may have traveled along the freshwater pipes to get to the sushi shop, reported News Now.

There are approximately 600 pairs of blue penguins at the Wellington harbor, reported BBC. This is also the time of year where they search for where to lay their eggs for the winter.

“It’s a natural characteristic of the penguins―they will always return to where they possibly were nesting,” Department of Conservation volunteer Mike Rumble told Radio New Zealand.

“That’s why I wouldn’t be surprised if the owner of the sushi bar calls again to say ‘they’re back’,” he said.

A pair of little blue penguins that were removed to the harbour by police have apparently returned to their refuge under a Wellington sushi shop. https://t.co/fWd3u56Oj5

Little Blue penguins are the smallest of all penguin species and they are also called fairy penguins, according to Penguins World.

This species are primarily spotted across the entire New Zealand coast and on Australia’s southern coast. They are also found along the coast of Tasmania and some have also been found on the coast of Chile.