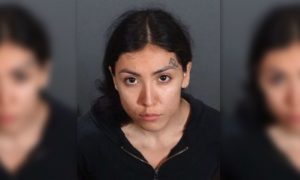 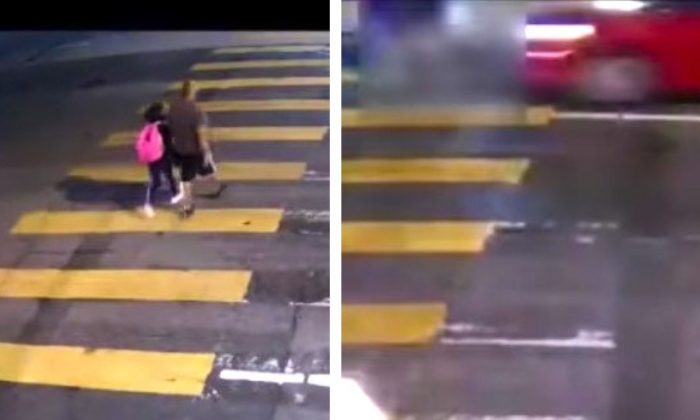 Police have released video of a hit-and-run at Glassell Park, Los Angeles, on Nov. 16, 2018. (LAPD)
Crime and Incidents

Los Angeles police have released a surveillance video of a horrific hit-and-run that took place last November as investigators appeal to the public for help identifying the suspect who remains at large.

The LAPD said in a news release accompanying the video that the felony hit-and-run took place at a marked pedestrian crosswalk at San Fernando Road and Hallett Avenue in the Los Angeles neighborhood of Glassell Park, in the early evening hours of Nov. 16, 2018.

The victims—Michael Devore and his 11-year-old daughter—were on a designated crosswalk when they were mowed down by a fast-moving car.

The collision was caught on video by a surveillance system from a nearby building.

The video shows Devore and his daughter—who’s wearing a bright pink backpack—walking across the yellow-striped crosswalk.

Police said the father and daughter were nearly all the way across the street when “a red four-door vehicle, possibly a Toyota Camry, approached them at a high rate of speed.”

As the pair approach the other side of the street, Devore turns his head to the right—the direction of the oncoming car.

“I knew right then and there they weren’t going to stop, and my daughter was the one that was in line to be hit,” Michael Devore told KTLA.

“The father realized that the vehicle was not going to stop,” police said, and he pushed his daughter out of the vehicle’s path.”

Footage shows the father push his daughter away from the vehicle a split second before it careens into him.

The impact sent Devore flying and footage shows him lying in a crumpled heap on the sidewalk.

Police said the driver “failed to stop to render aid and identify themselves, as required by law and fled the scene.”

Asked to comment about his heroic act to protect his daughter, Devore told KTLA: “I’m not a hero, I’m just a dad. I just did what I was supposed to do.”

“The father sustained a broken right femur,” police said, “and because of his fast actions his daughter only sustained scratches on her face.”

Authorities have asked anyone with information about the incident to contact the police.

Hit-and-run incidents have been on the rise since 2010, according to a 2018 report published by the American Automobile Association.

The AAA notes that the 2,049 fatalities that resulted from hit-and-run crashes in 2016 were the highest number ever recorded. This is a 60 percent increase since 2009.

“Hit-and-run crashes in the United States are trending in the wrong direction,” said Dr. David Yang, executive director of the AAA Foundation for Traffic Safety, according to an AAA news release. “Our analysis shows that hit-and-run crashes are a growing traffic safety challenge and the AAA Foundation would like to work with all stakeholders to help curtail this problem.”

Most victims of hit-and-run crashes resulting in death are pedestrians or bicyclists, according to the AAA.

The Association notes also that over the past 10 years, nearly 20 percent of all pedestrian deaths were caused by hit-and-run crashes.

“It is every driver’s legal and moral responsibility to take necessary precautions to avoid hitting a pedestrian, bicyclist, or another vehicle,” said Jennifer Ryan, director of state relations for AAA. “While no one likes being involved in a crash, leaving the scene will significantly increase the penalties for drivers- whether they caused the crash or not.”

It is illegal in every state for a driver involved in a crash to flee the scene.

Penalties include large fines, loss of license, or prison sentences.