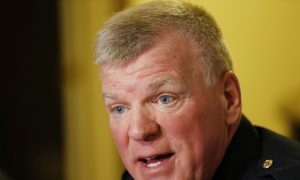 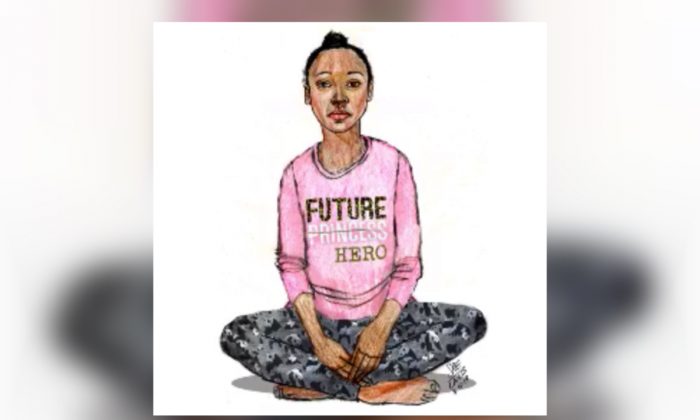 An artist's sketch of the girl whose body was found on a Los Angeles trail on March 5, 2019, released on March 6, 2019. (Los Angeles County Sheriff Department)
US News

Police have released a sketch of the unidentified girl whose body was found dumped on a California equestrian trail inside a suitcase.

She is described as a “skinny” black girl who weighed around 55 pounds stood around 4 feet 5 inches tall, authorities told reporters on March 6.

Her body was found on an equestrian trail in Hacienda Heights, Los Angeles County, on March 5.

Investigators said that there are currently no known motives in the case, which they are handling as as a suspicious death, Los Angeles County Sheriff’s Department Lt. Scott Hoglund told a news conference on March 6.

The girl was wearing a pink shirt with the words “Future Princess Hero,” along with blue leggings with pandas on them—images of which have been released by authorities.

“Investigators believe the victim was dumped sometime during the late evening hours of Sunday, March 3, and discovered on the morning of March 5,” Hoglund said.

County workers stumbled across the body, the upper torso of which was protruding from a black roll-away duffle bag, he said.

There were no obvious signs of trauma to the victim’s body said Hoglund.

Investigators are waiting for the autopsy results.

They also looking at a security video from a nearby Buddhist temple, according to authorities.

The sheriff’s office said they’re working with the Department of Children and Family Services, along with missing children agencies and surrounding school districts, hoping to find some possible leads.

“We don’t have any information regarding this victim. We need to identify the victim before we can really launch into our investigation, and that’s what we’re really looking for, is the public’s help,” Hoglund said.

According to the Californian Department of Justice (pdf), in 2018 there were 76,923 reports of a missing child who has left home without the knowledge or permission of parents or guardian and 269 reports of children missing due to suspicious circumstances in California.

Anyone with information about this incident is encouraged to contact the Los Angeles County Sheriff’s Department’s Homicide Bureau at (323) 890-5500. If you prefer to provide information anonymously, you may call “Crime Stoppers” by dialing (800) 222-TIPS (8477), use your smartphone by downloading the “P3 Tips” Mobile APP on Google Play or the Apple App Store or by using the website http://lacrimestoppers.org.