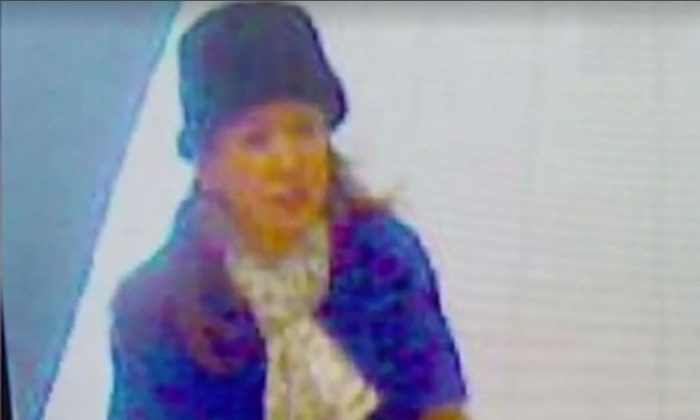 Police have released photos of a female suspect who allegedly tried to abduct a woman’s baby inside a mall in Long Island, New York.

Kristen Powers was on the first-floor bathroom and was changing her 1-year-old when a woman came in and told her he’s a “beautiful baby.”

The woman then walked around the bathroom to check if other people were inside and grabbed the baby’s arm and said, “Give me the baby,” police said, reported CBS New York.

“She put her hand on his forearm and as soon as she did that, I pushed her hand away and she said ‘give me the baby’ again, a second time,” Powers said, adding she ran from the bathroom with her son in arms. “I happened to run into an officer who was in Kohl’s as part of holiday security,” Powers added.

When the woman told her the child was a “beautiful baby,” it didn’t seem right, Powers recalled.

“The feeling that I got in my chest and my stomach told me that something was wrong,” she told WABC. “That I was in danger or he was in danger.”

The woman also asked to hold the child. “She had come close, very, very close to me,” she added. “I kind of put my hand up to stop her from getting too close, and she said, ‘Give me the baby.'”

“She took his forearm, and I felt him pull back towards me,” she added, according to WABC. “I didn’t hit her or anything. I just pushed her arm away, and I said, ‘No!’…When she touched my child, I felt like I’m in a dangerous situation, and if I don’t get out this bathroom, she is either going to hurt me or hurt him.”

Police said the suspect left the store in a black livery taxi cab.

Police said the suspect is a Hispanic woman, 5-feet, 5-inches tall, who has long blonde hair. At the time, she was wearing a blue jacket, a yellow shirt, and a multi-colored skirt.