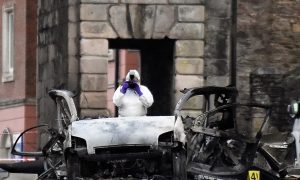 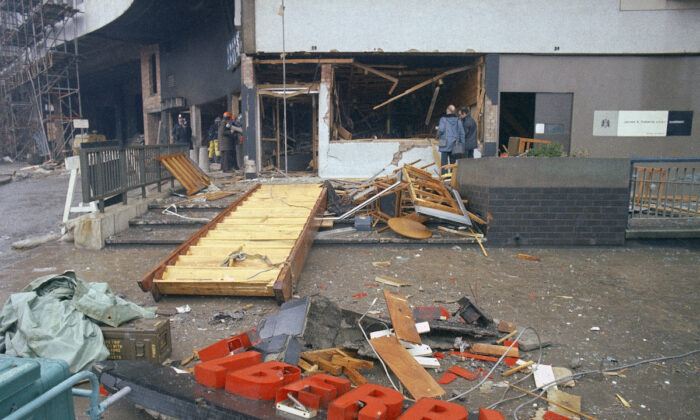 The scene outside the Mulberry Bush public house in the centre of Birmingham, England, after a terrorist bomb exploded in November 1974. (AP Photo)
UK

Police say that they have released the unnamed 65-year-old man who was arrested on Wednesday in connection with the 1974 Birmingham pub bombings.

West Midlands Police said that he was interviewed at a police station under the Terrorism Act in connection with the killings of 21 people.

Police gave no indication of further investigations as they announced the suspect had now been released.

After 46 years, no one stands convicted for the bombings, which caused the biggest single loss of life on the British mainland during the 30 years of the troubles.

“We are committed to finding those responsible for the terrible murders of 21 innocent victims almost 46 years ago,” Detective Chief Superintendent Kenny Bell, the counter-terrorism chief for the West Midlands, said in a statement.

“Let me assure families of the victims and the people of Birmingham that we’re working relentlessly to find the bombers and bring them to justice.”

Saturday marks exactly 46 years since the twin bombs exploded at the Mulberry Bush and Tavern in the Town pubs on the night of Nov. 21, 1974.

A third bomb in another pub failed to detonate.

Julie Hambleton, whose 18-year-old sister died in the attacks, told the BBC that the arrest was “the most monumental event” since the convictions of the Birmingham Six were quashed in the appeals court 29 years ago.

She said she broke down in tears on hearing of the arrest.

The IRA was believed to have planted the bombs, but never claimed responsibility.

Families of those killed in the Birmingham bombs have long campaigned for a clearer picture of what happened that night, and how police responded to a phone call warning about the bombs.

An inquest last year concluded that the “inadequate” warning call from the Provisional IRA contributed to the deaths. Jurors found no fault with the police response to the warning or to two alleged tip-offs.

Six men who later went on to be known as “the Birmingham six” were arrested on the night of the explosions and wrongfully convicted in 1975 for the bombings.

Hugh Callaghan, Paddy Hill, Gerard Hunter, Richard McIlkenny, William Power, and John Walker had their convictions quashed in the appeals court in 1991 and were released after 16 years in jail.