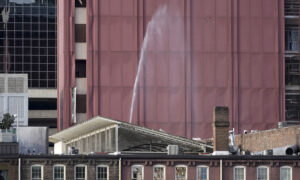 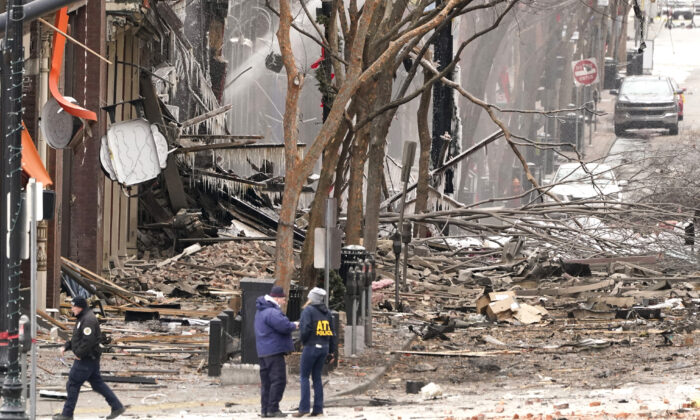 Emergency personnel work near the scene of an explosion in downtown Nashville, Tenn., on Dec. 25, 2020. (Mark Humphrey/AP Photo)
Crime and Incidents

The Metro Nashville Police Department released a photo of the RV that exploded in downtown Nashville, Tennessee, on Friday morning, Christmas Day.

The image appears to have been taken from a surveillance camera located at the intersection of Commerce Street and 2nd Avenue North, about half a block from the place where the incident happened.

The police said it arrived at 1:22 a.m. CT, about five hours ahead of the explosion.

“This is the RV that exploded on 2nd Ave N this morning. It arrived on 2nd Ave at 1:22 a.m. Have you seen this vehicle in our area or do you have information about it?” the police department wrote in a Twitter post.

Various law enforcement departments urged people who have seen the vehicle or have information about it to contact the Metro Nashville Police Department Crime Stoppers by calling 615-742-7463 or provide information to FBI Memphis via their website.

“Due to telecommunications issues associated with this morning’s incident in downtown Nashville, FAA has temporarily halted flights out of BNA. We expect the issues to be resolved & anticipate service to resume by 3 pm CT. An update will be provided by 3:30 pm CT,” the airport said in a statement on Twitter.

It’s unclear what kind of telecommunications issues were caused by the explosion. Local AT&T wireless and internet service was disrupted after the explosion and the outage caused widespread 911 issues locally, the Tennessean reported.

Nashville police were able to usher people to safety before the explosion. A warning message was broadcast urging people to evacuate moments before the blast.

Officers with the Metro Nashville Police Department carried out door-to-door and apartment-to-apartment checks and managed to get people to safety shortly before the blast, according to statements made at a press conference.

There was a loudspeaker warning people to clear the area before the massive blast, according to a Metro Nashville Police spokesperson and surveillance footage.

“All buildings in this area must be evacuated now,” a voice could be heard in the video. “If you can hear this message, evacuate now,” the warning was repeated before the blast occurred.

One officer was knocked down to the ground by the explosion, while another experienced temporary hearing loss, police said at the presser. No officer sustained serious injuries in the incident, police said.

Police spokesman Don Aaron said three people were taken to area hospitals for treatment, although none were in critical condition.

He added that the 6:30 a.m. blast was believed to be “an intentional act.”