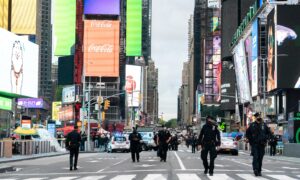 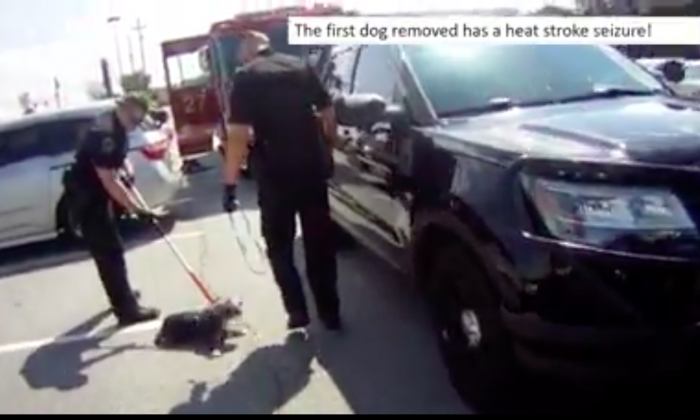 A dog having a seizure after being removed from a hot car in Georgia on July 2, 2017. (Courtesy of Roswell City Police)
Crime and Incidents

Police in Georgia released footage on Wednesday, July 6, of two officers rescuing a pair of dogs trapped in a hot car for over an hour.

The footage shows a police officer taking the temperature of the car in the front seat with a dog barking in the background, and the thermometer registering at 167 degrees at one point.

Roswell City Police said a concerned citizen called them after seeing the dogs in the car, and an officer can be heard in the video saying to the woman, “Believe me, you did the right thing.”

One of the dogs became aggressive when police tried to remove it from the car and had to be removed with a catch pole. Hearing the dog in distress, another dog that had been hiding under the front seat to avoid direct sunlight emerged, Roswell police said in the video.

Police said the first dog had a seizure from heat stroke shortly after being removed from the car.

Firefighters arrived to help cool the dogs off, and after sending pages to a local movie theater, the owner of the animals also showed up.

Apparently unaware what had been going on, a woman, who appeared to be the dogs’ owner asked a Roswell City firefighter what had happened to her dog.

“He was left in a hot car,” the fireman responded.

While washing one of the dogs off in a fire hydrant, the same woman said she had not been out to check on the dogs since she left them.

“I think we got here just in time to save these animals’ lives,” the policeman wearing the bodycam tells her.

The dogs were taken for emergency medical treatment and both discharged in good health.

The woman was charged with two counts of animal cruelty and the dogs were taken as evidence by the Fulton County animal control.