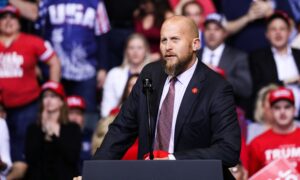 Trump, Parscale Deny Reports That President Yelled at Him
0 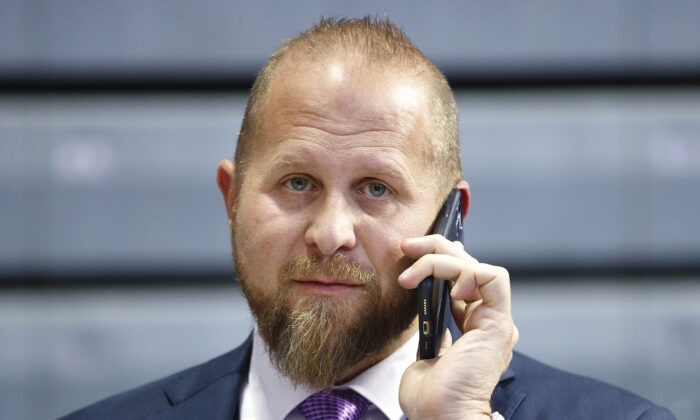 Brad Parscale speaks on the phone ahead of a campaign rally in Des Moines, Iowa, on Jan. 30, 2020. (Tom Brenner/Getty Images)
Crime and Incidents

Update: Parscale’s wife, Candice, told Politico that he did not physically abused her, contrary to police reports.

“The statements I made on Sunday have been misconstrued. Let it be clear: my husband was not violent towards me that day or any day prior,” she said.

Fort Lauderdale Police on Monday released details of the arrest of Brad Parscale., an aide and former manager of the re-election campaign of President Donald Trump. This included the body-cam footage of the arrest, the police reports, and a recording of the 911 call that preceded Parscale’s arrest.

Parscale was hospitalized on Sunday after he allegedly threatened to harm himself at his home in Fort Lauderdale, Florida, according to reports. He was arrested under Florida’s Baker Act, which allows for police to detain a person who might harm themselves or others. Authorities also confiscated 10 guns from his home.

Police reports (pdf) released on Monday showed details of bruises observed on the arms of Candice Parscale, Brad Parscale’s wife. Officer Timothy Skaggs recounted that he observed “several bruises” on both her arms, and that she said the bruises “occurred a few days ago, during a physical altercation with Bradley, which she did not report.”

A responding SWAT team member, Steven Smith, who provided a supplementary account of the incident, wrote, “While speaking with Candace Parscale I noticed several large sized contusions on both of her arms, her cheek, and forehead. When I asked how she received the brusing, Candace Parscale stated Brad Parscale hits her.

“When asked if he made these markings today, she claimed he did not. I continued to ask if Brad Parscale physically assaulted her in anyway today and she said no, but he did forcibly smack her phone out of her hand when she was attempting to call Brad Parscale’s father.”

Parscale was named the manager for Trump’s reelection campaign in March 2018. Prior to being the campaign manager, he ran Trump’s digital advertising campaign in 2016 and was credited with helping Trump win at the time.

In July, Trump announced Bill Stepien as the new campaign manager and that Parscale would be a senior adviser to the campaign.

The footage of the arrest first shows Parscale, shirtless, walking from his home carrying a can of drink. As he walks slowly toward the policeman, he says, “I’m not trying to kill myself … I’m your friend,” he said, before taking a few further steps and appeared to want to start explaining the situation to the policeman.

“She’s walking—” he said, appearing to refer to his wife, then paused to put his can of drink on the back of a vehicle next to him.

“What’s going on?” the policeman asked. “I’m not doing anything, relax. What happened?”

Parscale then took further steps towards the policeman and said, “She started saying all this [expletive]—,” when suddenly, a voice off-camera interrupted and yelled, “Hey, get on the ground, man, get on the ground.”

Within three seconds, Parscale was tackled to the ground. Several police officers surrounded him and turned him onto his belly, and eventually handcuffed him. During the arrest, Parscale was heard saying, “I didn’t do anything” seven times, before the video clip ended as Parscale was brought to stand up.

Guns in the Home

An accompanying clip released showed Parscale’s wife, Candice Parscale, outside the home prior to his arrest, where she is heard telling officers that she fled the home after Brad Parscale allegedly became “irate” and “cocked a gun.”

“I was like, ‘Okay, this is [expletive] up,’ so I went to the front yard … to give him space, chill out, I saw him look out the window, then I heard a loud boom,” she told a police officer.

“You got a lot of guns in the house?” an officer later asked, to which Candice replied “about four or five … a shotgun, a rifle, glock.”

Skaggs wrote in the police report that Candice Parscale said there had been a “verbal altercation” where Brad Parscale had “manipulated his slide to the rear loading his firearm in front of her.”

“Candice immediately fled the residence and stated she heard a loud bang shortly after,” Skaggs recounted, citing Candice Parscale’s version of events. He wrote that Candice “realized that Bradley did not shoot himself” when she “heard Bradley ranting and pacing around the residence and the dog barking franticly.”

However, because Brad Parscale was “in possession of several firearms and refusing to vacate the residence,” Candice Parscale was still concerned that he would shoot himself, Skaggs wrote.

Skaggs recounted that after Parscale was arrested, he told officers that he is “not on any medication nor does he suffer from any medical illnesses.”

“Bradley stated that he has never been [Baker Acted] in the past. I feel without medical attention Bradley’s safety is at risk and others as well,” Skaggs wrote. “Based on Bradley’s violent behavior, his alcohol consumption, his agitated mental state of mind, and his previous comments of suicide, I, transported Bradley to BGH Baker Act Unit to undergo treatment.”

Skaggs also wrote that Candice “stated that Bradley has been stressed out for the past two weeks and has made suicidal comments throughout the week to shoot himself. … Bradley did not make any suicidal comments today [Sunday] however [Candice] was concerned for his safety. [Candice] advised Bradley drinks and he ‘suffers from PTSD,'” he added.

“Brad Parscale is a member of our family and we all love him. We are ready to support him and his family in any way possible. The disgusting, personal attacks from Democrats and disgruntled RINOs have gone too far, and they should be ashamed of themselves for what they’ve done to this man and his family,” he said, referring to the acronym “Republican in name only,” used to describe Democratic-leaning Republican politicians.

If you’re struggling with suicidal thoughts or worried about someone who is, call the National Suicide Prevention Lifeline at 800-273-8255 for confidential support 24/7, or text HOME to 741741.