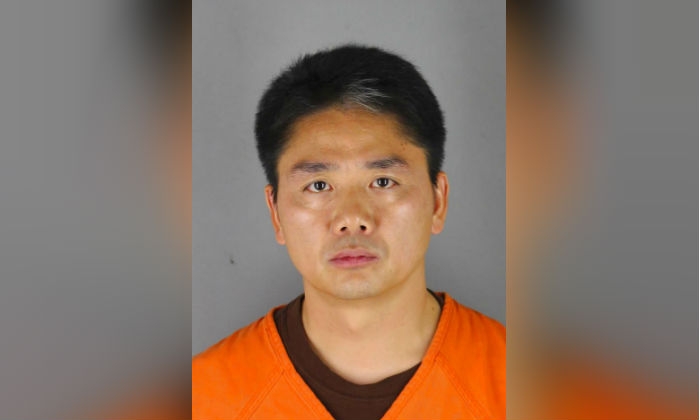 MINNEAPOLIS—Police who were called to a report of an alleged rape by Chinese billionaire and JD.com founder Richard Liu last August initially decided to release him because it was unclear to them if a crime had occurred, according to investigative files released on July 24 that include conflicting statements from the woman and Liu.

But later that day, Liu was arrested and booked into the county jail on suspicion of felony rape after the woman, a Chinese student at the University of Minnesota, reported details and said Liu forced himself on her after a night of drinking. He was released the next day and ultimately not charged after prosecutors said there were problems with evidence.

The data released on Wednesday by the Minneapolis Police Department offers a glimpse into the investigation and shows how Liu, the woman, a limo driver, Liu’s assistants and others gave conflicting versions of what happened. The data includes police reports, interview transcripts, 911 transcripts, a recorded interview with Liu, text messages and video. The documents show the woman threatened to go to the media if she did not get money and an apology from Liu.

The alleged assault happened on Aug. 31 when Liu, 46, was in Minneapolis for a weeklong residency as part of the University of Minnesota’s doctor of business administration China program, geared toward high-level executives in China.

The woman, Jingyao Liu, alleged Richard Liu and other wealthy Chinese executives coerced her to drink during a dinner party. She told police that Liu then made unwanted advances in his limousine and later raped her at her apartment. The Associated Press does not generally name alleged victims of sexual assault, but her attorney Wil Florin has said she agreed to be named. She was 21 at the time.

She sued Richard Liu and his company in April. That case is pending.

The data released on Wednesday shows police went to the apartment and found Richard Liu lying on the bed wearing only a T-shirt. Police handcuffed him, helped him get dressed and took him to a squad car.

What followed, according to the documents, was a patchwork of conflicting stories and changing accounts.

That night, Jingyao Liu told one officer, “I was raped but not that kind of rape,” according to police reports. When asked to explain, she changed the subject and said Richard Liu was famous and she was afraid. She told the officer the sex was “spontaneous” and that she did not want police to get involved.

According to the data, officers released Richard Liu because “it was unclear if a crime had actually taken place” and they couldn’t establish probable cause.

In a later interview with an investigator, Richard Liu said the sex was consensual and that the woman “enjoyed the whole process very much.”

Jill Brisbois, an attorney for Richard Liu, said in a statement that the evidence reaffirms their belief that Liu is innocent. She said the police reports and videos fully dispel “misinformation and unsubstantiated speculation” and support prosecutors’ decision not to file charges.

Florin said police body camera footage shows Jingyao Liu initially said she was raped—but after Richard Liu gave her an angry look, she told police she was afraid of his power and retracted her initial statement. The body camera video was not retained by police after 90 days because it contained “nothing evidentiary,” said police spokesman John Elder. Florin did not provide the video to the AP.

According to a transcript of a police interview, the woman said Liu kissed her and tried to take off her clothes in the limo, and she tried to push him away. She said she didn’t know where they were going and was afraid, so she asked to go to her apartment. There, she said, Richard Liu tried to take off her clothes over her protests, tried to pull her into the shower and eventually raped her.

She told police that she begged him, “Please, please … I don’t want to do this.”

She also told police she wanted Liu to apologize, and she threatened to go to the media if she didn’t hear from Liu’s attorney. Transcripts show she spoke with Brisbois and asked for an apology and money.

In a roughly 30-minute interview with an investigator, Richard Liu said the woman invited him to her apartment, where she initiated sex acts and helped him shower. He said it was clear she “want to make love with me.”

Officers also interviewed Liu’s employees and the limo driver. According to transcripts, one assistant said Richard Liu and the woman were intimate and she didn’t seem distressed.

However, the driver said when the pair was outside the limo, Richard Liu “grabbed” and seemed to overpower the woman, and brought her into the vehicle. He said he looked in the mirror and saw “this guy was all over this girl.” He said Liu’s assistant adjusted his mirror. He told police he heard kisses and moaning but didn’t hear anyone say “No.” The driver said he didn’t know if the activity was consensual, according to a transcript.

Richard Liu, known in Chinese as Liu Qiangdong, is a prominent member of the Chinese tech elite, with a fortune of $7.5 billion. He is part of a generation of entrepreneurs who have created China’s internet, e-commerce, mobile phone and other technology industries since the late 1990s. The son of peasants, Liu built a Beijing electronics shop into JD.com, China’s biggest online direct retailer, selling everything from clothes to toys to fresh vegetables.

Liu is known to be a vocal advocate for the Chinese Communist Party. Liu has a seat in the National Committee of the Chinese People’s Political Consultative Conference, and has given talks about communism.

He is a member of the China Democratic National Construction Association, an organization that promotes the Chinese Communist Party’s “socialism with Chinese characteristics.”

The Chinese regime may be affording Liu preferential treatment and has been paying close attention to Liu’s case. Chinese Foreign Ministry spokeswoman Hua Chunying said in a Sept. 3, 2018 press briefing that the Chinese Consulate General in Chicago was keeping an eye on the case, and was in contact with the relevant U.S. organizations for updates on the situation. It is rare for Beijing to take such public interest in the fate of a Chinese businessman overseas.

By Amy Forliti. The Epoch Times contributed to this report.