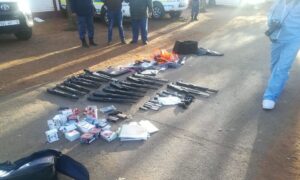 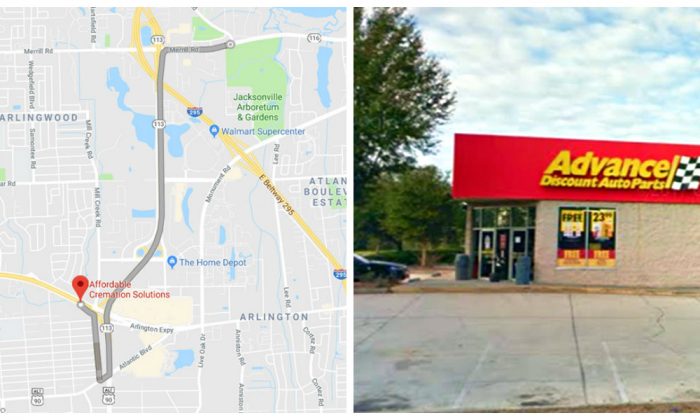 A van recently stolen with a body inside was found about 10 minutes from where it was taken, in an auto parts shop parking lot. (Google Maps)
US News

A van with a dead body inside that was stolen on Monday has been recovered, thanks to the help of an observant citizen who spotted it in an auto parts shop parking lot.

The stolen 2006 silver Honda Odyssey Van #JSO was searching for has been located with the dead body inside.

A citizen observed the van abandoned in the 9500 blk of Merrill and contacted police. Thank you to the citizen who called it in. Working together makes a difference. pic.twitter.com/GvjYsTPlHJ

On Monday the  Sheriff’s office in Jacksonville, Florida, tweeted a call for citizens to be on the lookout for a silver 2006 Honda Odyssey that went missing while it was parked, unlocked with key in ignition. The thief may have gotten more trouble than bargained for, since there was a body in the vehicle, being professionally transported for a local cremation company.

BOLO: 2006 silver Honda Odyssey Van with Florida tag NIS5N. Stolen when it was left parked with the keys in the ignition from 8500 block of Arlington Expy. The vehicle was transporting a dead body for work purposes when taken. Please RT #JAX #JSO #Jacksonville

In a video interview with First Coast News the owner of Affordable Cremation Services recounted the story of the theft of the van from the business’s parking lot:

“He [the driver of the van] came here to the front of the building, parked exactly maybe 5-10 steps from the door…He came inside to bring the paperwork so that the director could get started with the processes of getting the approval to have the cremation done…And she [the director] noticed the car moving, so she says to him, ‘Your car is leaving.’ They turn around, run outside, to see the car going off down the street.”

The van was found abandoned in an auto parts parking lot, with the body thankfully still inside.

It is about a 10 minute drive between Affordable Cremation Services and the site that the vehicle was abandoned. One can only wonder about the process of discovery for the car thief, and whether the route was affected at all by that discovery.

So far, police have not announced any suspects.