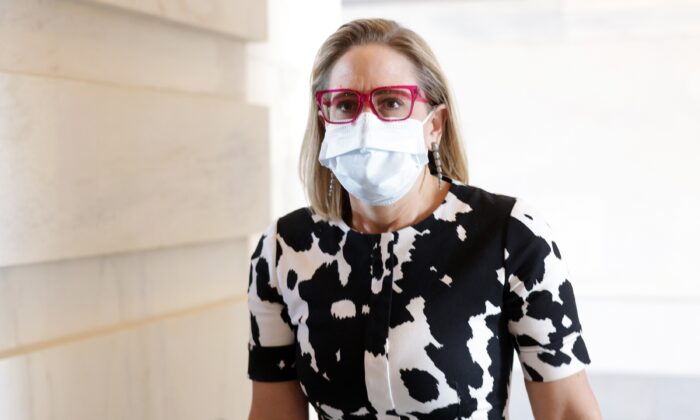 Sen. Kyrsten Sinema (D-Ariz.) arrives at the U.S. Capitol in Washington for a vote on Sept. 29, 2021. (Alex Wong/Getty Images)
Crime and Incidents

Police Recommend Charges Against Four Over Harassment of Sen. Sinema

Police officials at Arizona State University have recommended to prosecutors that they charge four people over the harassment of Sen. Kyrsten Sinema (D-Ariz.) at the school earlier this month.

Activists, including some with a group called Living United for Change in Arizona (LUCHA), confronted Sinema in Tuscon on Oct. 3. They harassed her and illegally recorded her in a bathroom.

After an investigation, the Arizona State University Police Department submitted charges of disorderly conduct and disruption of an educational institution to the Maricopa County Attorney’s Office, a spokesman confirmed to The Epoch Times via email.

Both charges are misdemeanors that typically can land a wrongdoer up to six months in jail.

State law makes recording in a bathroom without another person’s consent a felony. A violator can land up to 2.5 years in prison.

The spokesman declined to say why there was no recommendation to charge anybody under the law.

Footage of Sinema in the bathroom was circulated widely by LUCHA and other groups, who are trying to pressure Sinema into backing President Joe Biden’s massive $3.5 trillion budget package. The moderate senator is negotiating for a lower budget, as is fellow moderate Sen. Joe Manchin (D-W.Va.), upsetting some on the left.

Sinema denounced the harassment a day after it happened, calling it “unacceptable for activist organizations to instruct their members to jeopardize themselves by engaging in unlawful activities such as gaining entry to closed university buildings, disrupting learning environments, and filming students in a restroom.”

Sinema teaches at the university.

Sinema’s office did not return a request for comment, nor did LUCHA.

A spokesman for the Maricopa County Attorney’s Office said the office received the submission from the university police on Oct. 12.

“We have asked for additional information from the investigating agency and the case is considered under review by our office. There is no timeframe at this time as to when a formal charging decision might be made,” he said.

LUCHA has continued protesting against Sinema. It posted photographs on Facebook on Wednesday showing activists outside one of her offices.