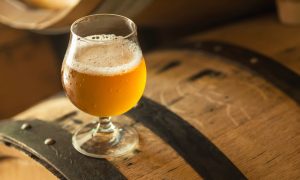 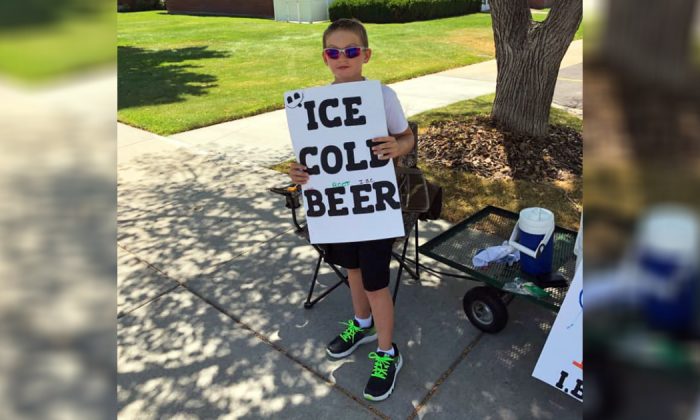 An underage child holds a sign advertising what appears to be "ice cold beer" in Brigham, Utah, on July 16, 2019. (Brigham City Police Department)
US News

A Utah boy had some serious questions to answer after authorities asked why he was holding a sign that advertises “ice cold beer” on July 16.

A boy in Utah with a unique marketing strategy caught some attention from police. According to a Facebook post from the Brigham City Police Department, the boy was holding up a sign that said, “ICE COLD BEER.”https://t.co/M6BOLKtKM2 pic.twitter.com/4O9aXXjysp

After examining the product officers confirmed the substance was non-alcoholic and did not break any state liquor laws, which prohibit anyone under the age of 21 from buying or consuming alcohol.

“This young man, in the area of 600 South 200 East, has a twist on a lemonade stand,” the police department said on Facebook. “Yep, he’s selling beer … root beer that is.”

“Approximately 500 businesses sell beer for consumption on the premises,” the department said on its website. “Almost half are located in the Salt Lake and Park City area.”

Establishments must also serve beer between 10 a.m. and 1 a.m.

“Beer may be purchased without ordering food, and is sold on draft and in bottles and cans,” the department said. “Beer sales to go are also allowed.”

Off to a good start. 9:30 AM Wednesday, less than 24 hours after glass recycle bins were placed at the Utah Wine Store on 3rd West and Harris Ave, 2 of the 4 bins have glass. Take your glass bottles here to be recycled. pic.twitter.com/7rIl99ydfd

Beer must also have no more than 4 percent alcohol content by volume or 3.2 percent by weight when sold in taverns, beer establishments, and stores.

“Minors are not allowed on the premises of a tavern,” the department said.

Ever wanted to peek inside the DABC warehouse? Curious how it operates? Now get an inside look at the operation that supplies the bars, restaurants, & Utah State Liquor stores and houses $40-million dollars worth of beer, wine,and spirits. https://t.co/y3ZG7iKnIm

Officers confirmed the unusual marketing strategy seems to have worked a little too well through attracting a high volume of sales and also some unwanted attention.

“Apparently it’s paid off as business has been good,” police said. “His marketing strategy has resulted in several calls to the BCPD.”

This boy had a marketing strategy so good people called the cops on him. https://t.co/zNm1er9Iql

BREAKING NEWS: ‘Busybody’ neighbors call the COPS on a boy selling ‘ice cold beer’ – but find he is actually selling ROOT beer using a clever marketing trick. The stall proved popular with many locals, who called him a ‘genius’ and a ‘hero’. pic.twitter.com/hajIW3smDG