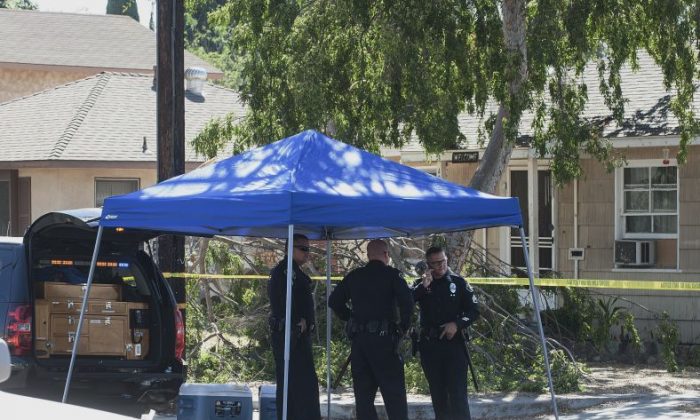 Fullerton police officers stand outside a house where three adult bodies were found in Fullerton, Calif., Saturday, Sept. 24, 2016. Police officers found two men and a woman dead in the house after a child called 911. (Nick Agro/The Orange County Register via AP)
US

FULLERTON, Calif. (AP) — Police investigating a triple homicide inside a Southern California home were searching for a teenage girl who lived there and is considered at-risk.

The probe began Saturday morning after a child called 911 to report her parents had died.

The child placed the call about 8:20 a.m., and officers were dispatched to a home in Fullerton, 26 miles (42 kilometers) southeast of Los Angeles. Inside, first responders discovered two men and a woman dead.

“Anytime someone loses their life it’s a tragedy,” police Sgt. Jon Radus said. “It’s even more of a tragedy when children are involved.”

Radus declined to release the children’s ages or their relationship to the three adults found inside the home, citing the ongoing investigation. He said detectives spent the day searching for the children’s sibling, identified as 17-year-old Katlynn Goodwill Yost, but have not been able to find her.

“We’re concerned for her safety because we obviously haven’t been able to find her,” Radus said.

He said there were obvious signs of trauma to the bodies, but he would not release any details on how the adults might have died. Authorities were still working to determine their cause of death and identify them.

Investigators were classifying the deaths as a multiple homicide. In a statement, the Fullerton Police Department said the agency has “committed all its resources to identify who is responsible for this act.”

Radus said authorities were working to obtain a search warrant to continue their investigation at the home. He said investigators were still trying to determine whether an outside suspect was responsible for the deaths.

“We don’t believe the community is currently in danger at this particular time,” he said.

A neighbor told the Orange County Register a couple lived in the house with three children, one a teenager and the others between 7 and 9 years old.

“It’s sad for the children. They’re now without parents,” Donna Trice told the newspaper. “The two little girls found the bodies, and that tears me up.”

The home sits on a block of single-family residences in a largely middle-class community.