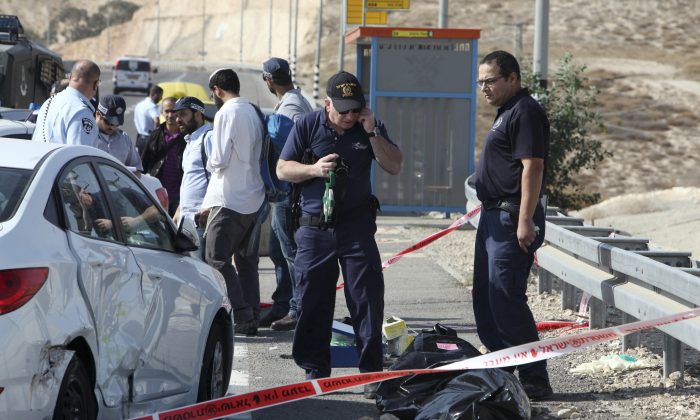 JERUSALEM—A Palestinian man died Monday after ramming his car into pedestrians at a crowded bus stop at the western entrance to Jerusalem, wounding nine, according to Israeli police.

Israeli Channel 2 TV News showed a white Mazda that had barreled into a bus station Monday under the city’s iconic Calatrava bridge.

Jerusalem Mayor Nir Barkat arrived at the site minutes after the attack, which occurred near his home in west Jerusalem.

He said the city would erect protective barriers near bus stations on the city’s main traffic arteries.

Barkat praised the “immediate alertness” of bystanders who averted “a grave tragedy.”

Israeli Prime Minister Benjamin Netanyahu said Monday, “We are facing a new kind of terrorism, a terrorism of individuals that affects not only us but other states in the world as well.”

The ramming is the latest in a three-month period of near-daily attacks. Since mid-September, Palestinians have killed 19 Israelis in stabbing, shooting and vehicular attacks. At least 113 Palestinians have died by Israeli fire in the same period, of whom 76 are said by Israel to be assailants. The rest were killed in clashes with Israeli security forces.

Israel blames the violence on incitement by Palestinian political and religious leaders. Palestinians say the attacks stem from despair at ever shaking off Israeli rule.