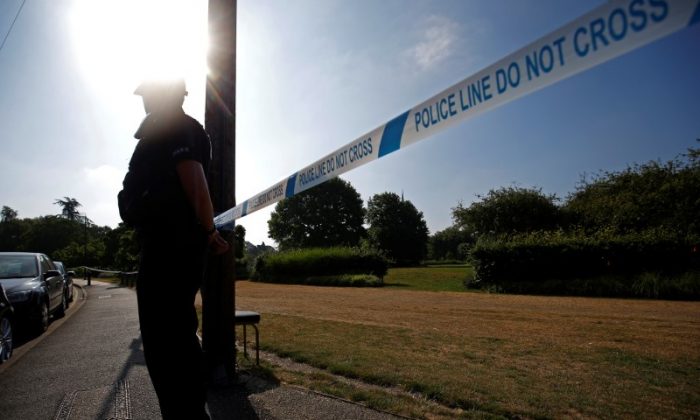 A police officer guards a cordoned off area after it was confirmed that two people had been poisoned with the nerve-agent Novichok, in Salisbury, Britain, July 5, 2018. (Henry Nicholls/Reuters)
UK

Police are expected to take months to complete an investigation into the poisoning of a British couple who remain in critical condition in Wiltshire, England, officers said.

Dawn Sturgess, 44, and Charlie Rowley, 45, fell ill on June 30 after being exposed to a military-grade nerve agent, Novichok, the same nerve agent that nearly killed ex-Russian spy Sergei Skripal and his daughter, Yulia.

Sturgess and Rowley are thought to have handled a contaminated object in the Salisbury area before becoming severely unwell.

Police are urgently on the hunt for that object.

“Due to the unique challenges involved with this operation, police activity is expected to take weeks and months to complete,” said London’s Metropolitan Police in a statement. “The focus of the investigation remains identifying the source of the contamination as quickly as possible.”

Officers said no-one else in the area has displayed similar symptoms.

Police are trawling through about 1,300 hours of CCTV footage as part of the investigation and a number of sites have been cordoned off in the area.

Officers have pieced together the following timeline of the couple’s movements before they fell ill.

-12.20 p.m. The man and woman are together at John Baker House in Salisbury. They then leave that venue and visit a number of shops in Salisbury before going to Queen Elizabeth Gardens.

-10.30 p.m. They catch a bus to Amesbury. In the absence of any information to the contrary at this stage, detectives are currently working on the basis that they then spent the night at an address on Muggleton Road, Amesbury.

-10.15 a.m. The South West Ambulance Service is called to an address on Muggleton Road, where a 44-year-old woman had been taken ill, and she was subsequently taken to hospital. A man was also present at the address at this time.

-Around 12 noon. The man visits Boots the chemist on Stonehenge Walk in Amesbury and then returns to his address in Muggleton Road around half an hour later.

-1.45 p.m. He visits the Amesbury Baptist Centre on Butterfield Drive.

-6.20 p.m. the South West Ambulance Service is called back to the address on Muggleton Road and the man is also taken to hospital.

About 100 detectives from the Counter Terrorism Policing Network are working on the investigation.

Detectives said there is no evidence that the pair had visited any of the sites that were decontaminated following the attempted murders of Sergei and Yulia Skripal in March.

The UK government has held Russia responsible for the poisoning of the Skripals, a claim that Russia denies.

“The eyes of the world are currently on Russia, not least because of the World Cup,” Javid said.

Police said, “We are not in a position to say whether the nerve agent was from the same batch that the Skripals were exposed to. The possibility that the two investigations might be linked is clearly a key line of inquiry for police.”