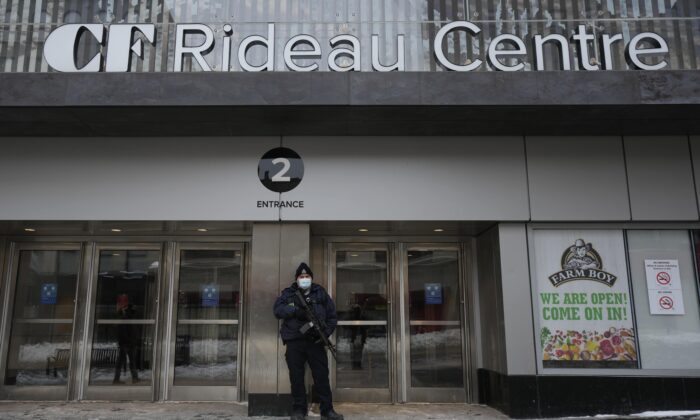 A police officer stands guard outside an entrance to the Rideau Centre in downtown Ottawa on Feb. 22, 2022. (Adrian Wyld/The Canadian Press)
Canada

A police operation that sparked an evacuation of Ottawa’s largest mall Tuesday afternoon is now over, with one person in custody and an investigation ongoing.

In their latest update at 3:31 p.m. ET on Feb. 22, the Ottawa Police Service confirmed that the operation at Rideau Centre that lasted nearly three hours has been completed.

Details of what triggered the operation remain unclear other than a series of tweets posted by the police starting at 12:46 p.m., urging the public to avoid Dalhousie Street to the Rideau Canal and the Mackenzie King Bridge in the city’s downtown.

At 12:55 p.m., the police posted and then deleted a statement on Twitter saying they were responding to a shoplifting call with a possible weapon and one person had been arrested. They posted again at 1:10 p.m. that only that one person was in custody and that the “police operation” was still underway.

The Epoch Times reached out to the Ottawa Police Service for further details but did not receive a reply by publication time.

Witnesses earlier said they were inside working or shopping when some of the lights went out, and stores started closing their doors. Shortly after that, someone on the loudspeaker said everyone should evacuate immediately.

“Someone just reported that there was a man with a gun. They reported someone to the mall security and all the police came and they told us to get out,” said Budry Hakeemy, owner of the Taylor & Colt barbershop on the mall’s third floor, in an interview with The Canadian Press.

Many police came with guns drawn. A dozen police cars with lights flashing sat in front of the mall’s various entrances, and police tape closed off one block in front of the northwest doors.

At least six officers were seen guarding the interior doors at the south entrance, one of them with a rifle.

A nearby school went into lockdown briefly as the events began to unfold but returned to normal operations within an hour.

Cadillac Fairview Corporation Ltd., which owns the Rideau Centre, said in a statement that police immediately responded to the incident. In the late afternoon, the company said the onsite investigation was complete and the mall would open for the remainder of the day.

The mall is a few hundred metres east of the Parliament Buildings, and was closed on Jan. 29 when the Freedom Convoy trucks arrived in the city to protest COVID-19 mandates and restrictions. The mall remained closed until Feb. 22.