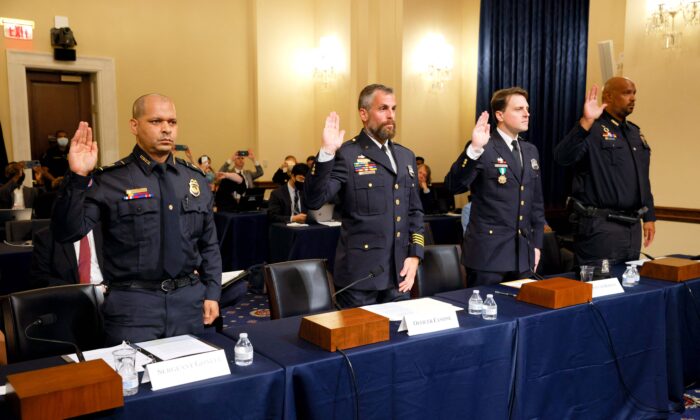 Some who breached the U.S. Capitol on Jan. 6 assaulted law enforcement officers, used denigrating language, and made specific threats against then-Vice President Mike Pence and House Speaker Nancy Pelosi (D-Calif.), members of Congress heard Tuesday from some of the officers.

“The physical violence we experienced was horrific and devastating. My fellow officers and I were punched, kicked, shoved, sprayed with chemical irritants, and even blinded with eye-damaging lasers by a violent mob who apparently saw us, law enforcement—officers dedicated to ironically protecting them as U.S. citizens—as an impediment to their attempt to insurrection,” U.S. Capitol Police Sgt. Aquilino Gonell told a congressional hearing in Washington.

Daniel Hodges, a Metropolitan Police Department officer, recounted being told, “you will die on your knees.”

He was kicked in the chest and struck with something heavy in the head while he and fellow officers clashed with the crowd outside the Capitol.

Gonell, Hodges, U.S. Capitol Police officer Harry Dunn, and Metropolitan officer Michael Fanone expressed confusion and disgust over being attacked on Jan. 6, describing those who were there as terrorists and rioters. Gonell said he’s still recovering from the injuries he suffered then.

“I could have lost my life that day not once, but many times. But as soon as I recover from my injuries, I will continue forward and proudly serve my country in the U.S. Capitol Police,” said Gonell, an immigrant.

The officers testified in the first hearing held by the Select Committee to Investigate the January 6th Attack on the U.S. Capitol. The panel, formed by House Speaker Nancy Pelosi (D-Calif.), became widely opposed by Republicans after Pelosi rejected two of House Republican Leader Kevin McCarthy’s (R-Calif.) nominations, prompting him to withdraw the others.

Two Republicans are on the nine-person panel, Reps. Liz Cheney (R-Wyo.) and Adam Kinzinger (R-Ill.). Both were asked to serve on the panel by Pelosi.

Kinzinger told the hearing that the panel’s mission is simple. “It’s to find the truth and it’s to ensure accountability,” he said.

“Like most Americans, I’m frustrated that six months after a deadly insurrection breached the United States Capitol for several hours on live television, we still don’t know exactly what happened. Why? Because many in my party have treated this as just another partisan fight. It’s toxic and it’s a disservice to the officers and their families, to the staff and the employees on the Capitol complex, to the American people who deserve the truth, and to those generations before us who went to war to defend self-governance, because self-governance is at stake,” he added.

Before the officers spoke, Rep. Bennie Thompson (D-Miss.), the chairman of the committee, played a compilation of videos from Jan. 6 that lasted over three minutes.

At the end, a clip was shown of one man warning that they’d be back.

“It is chilling. I thank God for our democracy and our republic, which withstood this assault. But that man’s warning reminds us that this threat hasn’t gone away. It looms over our democracy like a dark cloud,” Thompson said.

He and other members thanked the officers and promised to get to the bottom of what led up to the Jan. 6 breach.

The officers “put their lives on the line in defense of the United States Capitol,” Thompson told reporters after the hearing. “It was riveting testimony. We’re thankful for that testimony. It sets the right tone for the work of this committee but it also says that there’s significant work that we have to do over the next few months.”

Over 535 people have been charged in the breach, and various federal agencies are probing crimes that were committed, but House leadership believed a new committee was necessary to investigate what unfolded after Republicans in the Senate in May blocked the formation of a panel.

Republicans not at the hearing kept trying to pin blame on Pelosi for law enforcement being ill-prepared for what happened.

“Leaving our officers on the frontline ill equipped was a dereliction of duty on @SpeakerPelosi’s watch,” Rep. Jim Banks (R-Ind.), one of the picks Pelosi rejected, said on Twitter.

Rep. Guy Reschenthaler (R-Pa.), during an appearance on Newsmax, alleged the panel was “nothing more than a distraction from [President Joe] Biden and Democrats’ border, crime, and inflation crises.”

Pelosi has challenged those allegations. She said the bipartisan panel “will pursue the truth.”

“Efforts by some Republicans to deny justice and accountability are an insult to the brave officers who risked their lives that day,” she said Tuesday.