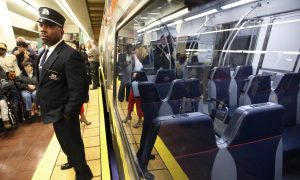 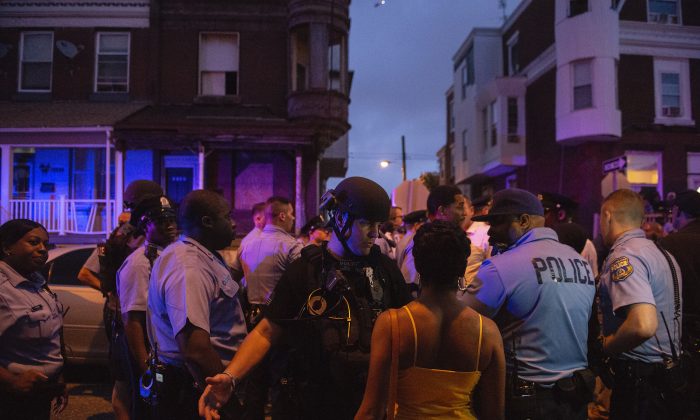 Police officers gather for crowd control during a shooting investigation in Philadelphia on Wednesday, Aug. 14, 2019. (Joe Lamberti/Camden Courier-Post via AP)
Crime and Incidents

Philadelphia police officers were harassed by a crowd gathered on the street during the long standoff with an illegally armed man who shot six officers, according to a reporter on the scene and recorded on video.

Local residents, some unable to return home, mixed with officers behind cordons on Aug. 14 during the eight-hour incident during which gunfire rattled up and down the streets of Nicetown-Tiago, before the gunman, who had taken two hostages, finally surrendered unharmed.

CBS3 reporter Alexandria Hoff wrote on Twitter that she saw a crowd of people “taunt police officers, laughing and yelling at them in the midst of gunfire” as police asked people to move off the street for their own safety.

Hoff later added, “98 percent of people here on the scene were respectful and concerned. That moment was just such a startling thing to see in the middle of something so chaotic.”

I mentioned this at 10 and since I was harassed during that live shot, I’ll mention it here too. A major moment of disappointment this evening was watching a crowd of people taunt police officers, laughing and yelling at them in the midst of the gunfire. #PhiladelphiaShooting

I should add – 98% of people here on scene were respectful and concerned. That moment was just such a startling thing to see in the middle of something so chaotic.

A video posted on Breaking 911 shows a crowd of people appearing to harass police during the incident, with one of them throwing an object towards an officer.

It is not clear whether this was the same incident that Hoff referred to.

At one point in the video, a woman pushes an officer away from her as he walks past, and later, a man in a black t-shirt can be seen aggressively gesturing at officers.

Hoff later wrote on Twitter: “We were on a block where police were asking people to move off the street to the sidewalk for their safety. A group of approx 12 people refused, some yelling disparaging things others laughing at those comments in the officer’s faces.”

The standoff was sparked when officers from the Narcotics Strike Force were serving a warrant at a multifamily home, according to Commissioner Richard Ross Jr., things “went awry almost immediately,” and the man opened fire.

None of the officers who were shot died, and all were released from the hospital. Three other officers suffered injuries related to the incident, including one who was injured in a car crash while rushing to the scene. At least one remained in the hospital.

The suspect was later identified as convicted felon Maurice Hill by a lawyer who had become embroiled in the standoff.  During negotiations, Hill made a call to the lawyer, mid-siege, from inside the row where he had barricaded himself.

As a convicted felon, it was illegal for Hill to be in possession of any firearms.

“Maurice called me in a panic, obviously,” his lawyer, Shaka Johnson, told CBS Philadelphia. “He did not want this to end violently and he really was sort of taking an opportunity to speak his peace. I told him ‘You gotta surrender, man,’” He said Hill was not injured but was checked out at a hospital before being released around 3 a.m.

Johnson said he spoke on the phone with Hill during a four-way phone call between him, his client, Philadelphia District Attorney Larry Krasner, and Police Commissioner Richard Ross prior to the seven-hour plus standoff ending.

Johnson said his client could have been shot dead and thanked the police.

“Let’s be clear, the police did an awesome job today. They were very patient, this had been going on for hours,” Johnson said. “Commissioner Ross could have pushed a button long before he did, quite frankly. So I want to give credit to the police for having some sort of patience with all of this … This could have gone very badly earlier in the day.”

President Donald Trump said on Aug. 15 that the suspect should “never have been allowed to be on the streets.”

“The Philadelphia shooter should never have been allowed to be on the streets,” Trump posted on Twitter. “He had a long and very dangerous criminal record. Looked like he was having a good time after his capture, and after wounding so many police.”