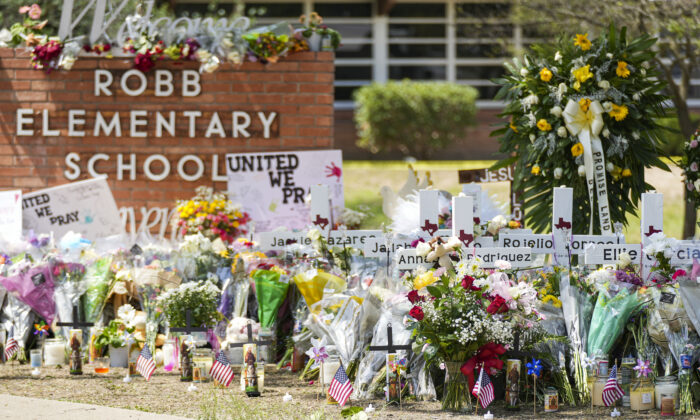 Police officers in Texas chose not to shoot a man with a gun on the campus of an elementary school because of concerns they would strike children, according to an officer involved in the response to the situation.

The officers, who used a police car as cover, wanted to fire back at the shooter but did not, according to Rios, who recounted his conversation with one of the officers.

“I asked him, ‘Why didn’t you shoot? Why didn’t you engage?’ And that’s when he told me about the background,” he said. “According to the officers, they didn’t engage back because in the background there was kids playing and they were scared of hitting the kids.”

The opportunity to fire at the shooter passed “really quick,” said Rios, who relayed what he knows to the Texas Department of Public Safety, one of the entities investigating the response to the shooting.

The Zavala County Sheriff’s Office declined to answer questions on June 20, citing the Juneteenth holiday. The Uvalde Police Department has not responded to voicemails.

The shooter soon made his way into one of the buildings on the elementary school’s campus and entered a classroom inside, where officials say he killed 19 students and two teachers.

Law enforcement officers were in the hallway outside the classroom for over one hour. According to several officials, Uvalde School Police Chief Pete Arredondo made the decision not to immediately breach the door.

In his first public comments after being identified as the officer in charge at the scene, Arredondo said the move stemmed from not being able to find the right key.

In the aftermath of the shooting, various officials gave conflicting timelines, and some questions about what transpired have yet to be resolved.

“It took a little bit longer than we initially had expected, but those conversations did develop through the day,” he said in Austin. “They are going to be cooperating.”

The panel is interviewing people behind closed doors but regularly gives brief updates to the public. In contrast, law enforcement officials have largely stopped sharing updates.