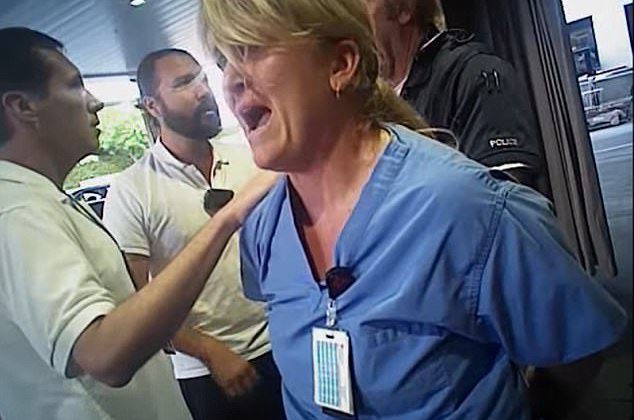 The police officer who illegally arrested a Salt Lake City nurse because she refused to draw blood from an unconscious patient later told fellow officers that he would bring all the homeless patients to that hospital “and take good patients elsewhere.”

Detective Jeff Payne, who also works as a paramedic, handcuffed nurse Alexandra Wubbels on July 26 after she refused to draw blood from a patient who had arrived at her burn unit in a coma following a horrific crash.

Upon hearing the nurse’s explanation, Payne dragged her out of the hospital, pushed her against a wall outside, handcuffed her, and placed her in his vehicle. While he and other officers waited by Payne’s car, one of the officers told him that he probably won’t be liked at the hospital.

“I’ll bring them all the transients and take good patients elsewhere,” Payne responded, according to video footage obtained by the Salt Lake City Tribune.

As the officers discuss if the arrest will stick, Payne mulls how his earlier action would affect his job as a paramedic. Payne’s boss told the Tribune that might be the case.

Gold Cross Ambulance is conducting an investigation into Payne’s conduct, according to Mike Moffitt, the company’s president. Moffitt did not know about the incident until footage of it was released to the public by Wubbels and her lawyer on Thursday, Aug. 31. Moffitt was distressed by what he saw, the Salt Lake City Tribune reported.

“There is nothing in his work history, in his file, that is anywhere remotely similar to this,” Moffitt said.

Payne has worked with the ambulance company for 30 years and has a track record of punctuality, hard work, and diligence, Moffitt said.

“This is different behavior from what we’ve seen here at Gold Cross,” Moffitt added.

Moffitt examined the records of Payne’s ambulance transport during the period following the incident with the nurse and it does not appear that he followed through on his threat to bring all the homeless patients to University Hospital. The logs indicated that he has not taken any patients there since July 26.

“So it doesn’t seem like he’s done anything inappropriate,” Moffitt said.

As the internal investigation at Gold Cross continues, Payne is still working a few shifts per week, but may be reprimanded or terminated based on the outcome of the probe.

The patient was identified as William Gray, 43, a reserve police officer in Rigby, Idaho. The Rigby Police Department hailed Wubbels as a hero for standing up for Gray.

Over the weekend, video footage surfaced of the fiery crash that severely injured the patient who Wubbels stood up for. In it, a small sedan is seen escaping a police cruiser, swerving into oncoming traffic, slamming head-on into a truck, and exploding on impact.

The Salt Lake City Police Department is conducting an investigation of the incident. Both the police chief and Salt Lake City mayor issued an apology for Payne’s actions.