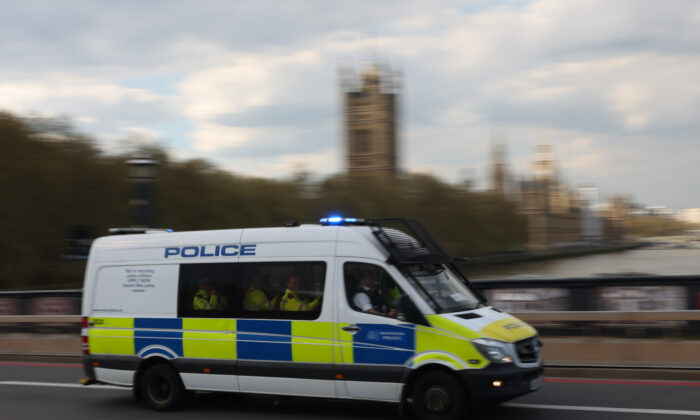 One of the two officers hospitalised after being stabbed in central London has been discharged from hospital, the Metropolitan Police said on Saturday.

The force said the female officer, who was stabbed in the arm, was discharged following surgery.

The male officer, who was stabbed in the neck, remains in hospital in stable condition.

“Their injuries are not assessed at this time as life-threatening,” the Met said.

The officers—both attached to the Met’s Central West Command Unit—were carrying out routine duties when they were stabbed at around 6 a.m. on Friday morning by a 24-year-old man.

They were on patrol in the area of Leicester Square and dealing with another incident when they were made aware of a man in possession of a knife, the Met said.

Met Commissioner Sir Mark Rowley previously said the female officer challenged the man, who stabbed her in the arm before attempting to flee.

The male officer caught the offender, who stabbed him three times in the neck and once in the chest.

The man also stabbed two of the additional officers who rushed to the scene. One received a minor hand injury while another sustained damage to his protective vest caused by the knife, the Met said.

Taser was discharged and the man was arrested on suspicion of causing grievous bodily harm and assaulting an emergency services worker.

The Met does not consider the incident to be terror-related at this stage. The force is appealing to those who witnessed the incident or have video evidence to come forward.

The suspect’s identity has not been revealed. In most cases, UK police do not identify suspects before they are charged.

Detective Chief Superintendent Owain Richards, from the Central West Command Unit, responsible for policing Westminster, said: “Every day, police officers go out on the streets to keep the communities of London safe. In doing so they often have to put themselves in the way of danger, putting their own welfare at risk in order to protect others.

“The actions of these two officers, and their colleagues, exemplifies the key value of courage that runs through the core of the Metropolitan Police and they will be offered all the support they need as they begin their recovery from this terrifying incident.”