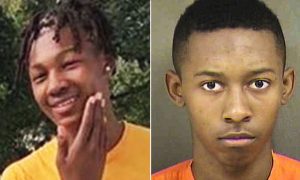 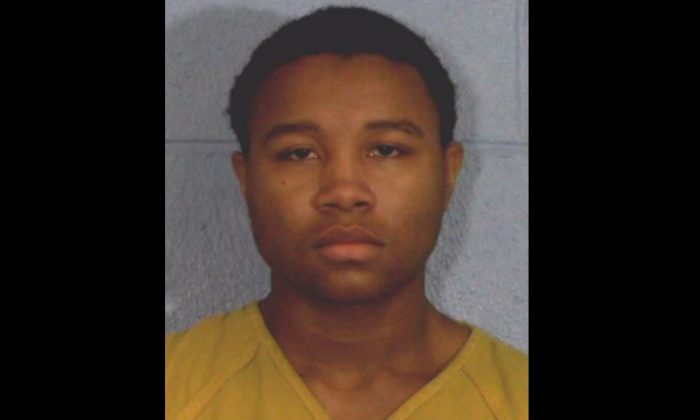 Devant Y’Shaun Davis-Brooks, 17, was arrested for threatening to shoot up Taylor High School during a gaming session in Taylor, Texas, just outside of Austin, on Jan. 23, 2019. (Taylor Police Department)
Texas

An off-duty police officer playing a video game overheard a teenager threatening to shoot up a high school and was able to identify him, leading to the teen’s arrest.

Devant Y’Shaun Davis-Brooks, 17, was apprehended this week for allegedly making the threat.

The Fort Worth police officer happened to be one of the people participating in an online game with Davis-Brooks when the teen told other gamers he was going to shoot up Taylor High School just outside of Austin, according to police officials.

He then bragged about how he’d been arrested five months prior.

“When he made the threats, he referenced the fact that he had been involved in something before and advised to ‘Google it and you’ll know who I am,’” Taylor Police Department Commander Joseph Branson told Fox 4.

Thanks to that info and the officer’s tip, Davis-Brooks was identified and arrested.

He had been arrested in August 2018 for making threats against Taylor High School.

In that case, Davis-Brooks and two others were overheard discussing “detailed plans” to carry out an attack in the school that involved guns and bombs. A student who heard them tipped off a teacher, who alerted the principal, who alerted the school resource officer.

“We’re very proud of the student for doing that, to speak up, because they potentially saved a lot of lives today,” Taylor Independent School District Superintendent Keith Brown said.

In a statement on Jan. 23, the district acknowledged the arrest and said that Davis-Brooks, a former student, was never on campus.

“Early this morning, a former student was arrested for making threatening comments about Taylor High School during an online gaming session,” the district stated.

Early this morning, a former student was arrested for making threatening comments about Taylor High School during an…

“The Taylor Police Department was notified and immediately began an investigation. The individual was never on campus, and the concern of threats was brought to a safe conclusion within a couple of hours. At no time was there any danger to students or staff,” it added.

Criminal defense attorney and former prosecutor Toby Shook, who isn’t involved in the case, told Fox 4 that the previous arrest could lead to a harsher sentence.

“You can blame first time someone just being a 17-year old and not being mature,” Shook said. “But now he’s gone and made a threat again. It’s up to a third-degree felony now. So I think the DA’s office will take a look at trying to incarcerate him.”

Based on the felony arrest, Davis-Brooks could face up to 10 years in prison if convicted.

Thanks to the brave steps taken by one Napa Valley student, Detectives in our Investigations Bureau believe a tragedy may have been averted.

See the attached press release for more details and be reassured… https://t.co/riHJsqbEja

Police arrested a 14-year-old male student in Napa, California after a possible mass shooting threat was made against two different schools.

The Napa Police Department said the student told a classmate at River Middle School about his alleged plans to attack both the middle school and Vintage High School in the Napa Valley Unified School District. The student later made a specific threat against the classmate.

“When the victim told the student they were going to report this to police and parents, the suspect student threatened to kill the victim,” said the police department in a Jan. 7 press release.

Police were notified on Dec. 31, 2018, during the school’s winter break about the threats. The victim was able to provide evidence to authorities of both the threats against the schools and against the individual classmate, said police.

A spokesman for the Napa Police Department told the San Diego Union-Tribune that the victim showed text messages to investigators.

Investigators working with School Resource Officers then served search warrants at multiple residences connected with the student on Jan. 2, and further evidence of research and planning into a mass shooting was found.

“We haven’t recovered a bunch of bombs and guns,” Capt. Patrick Manzer told the Union-Tribune. “He was doing his research and trying to plan it, but hadn’t acquired stuff.”

The student was then detained and has remained in custody for the threats against the classmate. The identities of the suspect and the classmate were not released since they are both minors.