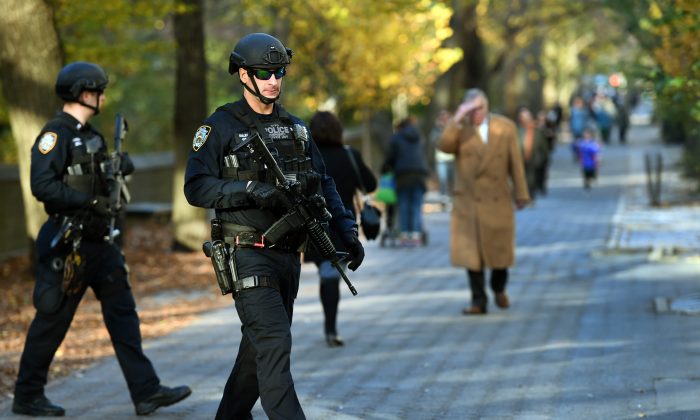 (Timothy A. Clary/AFP/Getty Images)
US

More police officers were killed this year than last, but the number is still one of the lowest since 1965.

The National Law Enforcement Officers Memorial Fund said in its preliminary report that 124 law enforcement officers died in the line of duty in 2015, a 4 percent increase from 2014, when 119 officers were killed.

“Each year as we issue this fatality report, we are reminded of the vital service and supreme sacrifice given by our nation’s law enforcement officers,” said fund Chairman and CEO Craig Floyd in a statement.

“There has been a lot of criticism and second-guessing directed at law enforcement this past year, but we must never forget that 124 officers gave up their lives for our safety and protection. Another 900,000 officers put their lives on the line every day. We owe all of those men and women a huge debt of gratitude.”

Of the 124 officers who have died in 2015, 42 were firearms-related fatalities—a lower number than the 49 who died as a result of gunfire last year. These further break down into circumstances behind the shootings, with ambush (15), traffic stop (7), and suspicious persons (5) leading the way.

Fifty-two officers were killed in traffic-related incidents, which was higher than the 49 who died last year from such incidents. The rest of the deaths were filed under “other causes,” primarily meaning heart attacks or illnesses.

While the number still represents dozens of deaths, it’s the second-lowest—behind last year—since the fund started compiling the data in 1965.