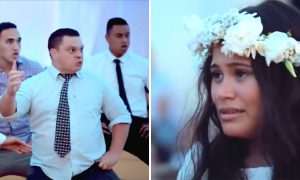 Officer Who Hugs Knife-Wielding Attacker Impresses the Internet With Compassion

In June 2017 an amazing encounter between a police officer and a man with a knife caught on video made the rounds on social media, instantly becoming a viral video. A police officer used kindness to deescalate a situation with an armed man. Instead of reaching for his gun, this officer reached in his heart for kindness.

A man entered the Huai Khwang Police Station in Bangkok, Thailand, with a large knife and police officer Anirut Malee, standing nearby the entryway talks to the man. While the man holds the knife at the police officer, Malee doesn’t react by reaching for his gun.

Instead, he tries to talk to the man and persuade him to put down the knife. The man finally calms down and hands over his knife to Malee.

Malee, who has been a police officer for 23 years, told Khaosod English News that he tried to negotiate with the man first.

“I could have wrestled him down and taken his knife away, but what if he ended up hurting himself,” Malee told Khaosod English News.

The officer then does something unexpected and wraps his attacker in a huge hug. The man begins to cry and talks to Malee, showing remorse for his actions. The officers treat the man with respect and give him some water as he cries.

According to Malee, the man used to be a musician, but he had been working as a security guard for three days and had not been paid. On top of all of that, his guitar was stolen and all of these factors were stressing the man out.

“I told him, ‘Please calm down, brother. If you want a guitar, I can give you one. I promise you, but you must lay down your knife first,’” Malee told Khaosod English News. “I had to make him feel he could trust me.”

Malee said he heard the man out and sympathized with him, even offering a guitar to him and going out for a meal together. After the encounter, the man went to a hospital for a mental-health checkup. The police officer never filed charges against the man.

“The unnamed man was reportedly charged with carrying a weapon without permission, a misdemeanour that carries a 200 baht fine, though police waived the fee for him,” Khaosod English News reported. “Anirut said he also gave the man a guitar he had at the police station as promised.”

After the incident, Actor Russel Crowe Tweeted about Malee’s bravery. Incidentally, Crowe is one of Malee’s favorite actors.

Anirut made a video with TNN24 News Channel, thanking Crowe for his comment.

“Mr. Crowe, thank you for the comment,” he said in the video. “I am a big fan. And I am honored for what you said about me being your new hero.”

Crowe Tweeted back to Malee and Tin, the news anchor, that he wanted to send something special to the news station for Malee and Tin.

A month after the incident, the officer received an award for bravery from Thailand’s national police chief Chakthip Chaijinda. Chakthip said Malee was a model officer who used his experience and skill to defuse a situation that could easily have escalated into a tragedy, according to the Bangkok Post.

Malee now has a public Facebook page that he updates, and anyone can follow @AnirutTheBrave. He’s a huge Game of Thrones fan and posts about it on his page. He’s received comments on the page worldwide from people who were touched by his video.

One small act of kindness caught on tape has touched millions of lives globally and especially the man who initially tried to attack Malee. He will most likely never forget this encounter.