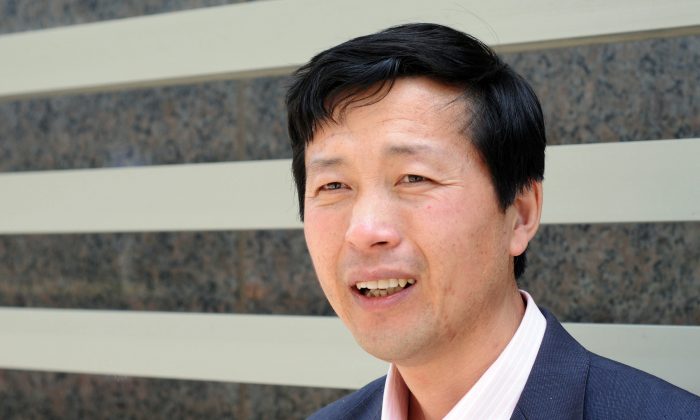 Eleven lawyers that sought to defend thirteen Falun Gong practitioners in northeast China were physically prevented from entering the courtroom by public security forces on June 21.

“Plainclothes police and many cars formed a blockade surrounding the court,” said Guo Haiyue, one of the lawyers in the team, in an interview with New Tang Dynasty (NTD) Television. The trial went on in the Dalian Xigang District Court, in Liaoning Province, but the 11 lawyers were unable to offer a defense of their clients.

The decision to obstruct the attorneys may have come from Beijing. Tang Jitian, one of the lawyers, said that officials from the Ministry of Justice in Beijing had invited the lawyers involved in the case in Beijing. Over the meal, the judicial officials told them to stay away from Falun Gong cases in future.

The night before the trial, four or five police banged on the lawyers’ hotel room door and tried to enter; they were ignored and eventually left.

Chinese authorities invoked the vague Article 300 to target the practitioners: “using an evil religious organization to undermine the implementation of the law.” In previous cases in China, civil rights lawyers have repeatedly argued that the provision has no legal basis.

In this case the practitioners had been arrested for installing small satellite dishes for residents in Dalian to watch NTD, an independent, primarily-Chinese language broadcaster that often reports about human rights and corruption in China.

Since NTD also regularly reports about the persecution of Falun Gong in China, the installation of the satellite dishes was enough for the authorities to charge them with Article 300, and declare the action illegal.

The lawyers remained unpersuaded. “The communist regime doesn’t have a clear and convincing law about this,” Tang said. “Accordingly, treating these people’s actions as criminal activity is obviously wrong.”

Lawyers requested a printed copy of the law from officials authorizing the regime’s current treatment of Falun Gong, and of the law that banned NTD satellites, but no response was given.

Zhang Haitao, a Urumqi-based netizen, said: “I feel that NTD reports the truth objectively,” and reports on topics avoided by the state-run media. “If everyone can see the truth, recognizing good and bad, it weakens the CCP’s evil control and that’s what the Party is afraid of.”

Tang Jitian said: “If the matter involves shedding light on the state of Chinese society, the CCP will certainly cover it up.”

A netizen identifying himself only as Zhang was quoted by NTD as writing: “If they’re being sent to court just for helping people install satellites, this is definitely something that infuriates people.”

Wang Quanzhang, a Beijing-based lawyer, who was in April detained by police for attempting to defend a Falun Gong practitioner, said: “Everyone knows that in this country, when one does the right thing, there’s still no guarantee that one will be treated fairly according to the law.”

The first court hearing related to the current Dalian case was scheduled for April 12, but at that time lawyers were also obstructed from entering, and were beaten by police, while some bystanders were arrested.

Tang Jitian saw the case in the broad context of the Communist Party’s control over media in China. Foreign media have tried to enter the Chinese market in the past, he said, but the Party has repeatedly prevented it. “I hope overseas media can break through the censorship,” Tang said.