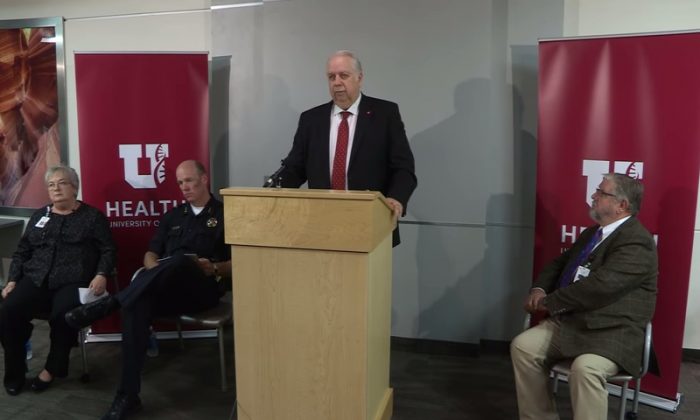 The University of Utah Hospital is changing its policies after they were unable to protect a burn unit nurse from a violent arrest incident.

A police body cam circulated widely of Officer Payne of the Salt Lake City Police arresting nurse Alex Wubbels for refusing to draw blood from an unconscious patient. The University of Utah security and police did not intervene in the situation in a manner sufficient for Wubbels not to have her nursing duties disrupted.

Hospital management, the head of nursing, the head of the burn unit, and university security have given statements at a press conference about changes they have already been making in policy since the incident. The new policies place nurses out of police contact, and prevent police from entering patient care areas. The hospital will now use individuals that are assigned to interact with police away from normal hospital staff and patient areas, as The Washington Post reported.

“While nurse Wubbels may say that she was simply following hospital procedure or just doing the job, we also recognize that she was placed in an unfair and unwarranted position,” said Gordon Crabtree, interim chief executive of the hospital. “To our nurses and staff, this will not happen again. And to that end, we are changing and have changed our interface protocols, with our law enforcement.”

Ultimately Wubbels was not charged with a crime, and hospital management was ultimately able to get her released from police custody. She and her lawyers decided to release the body cam footage of the incident. Since then, Salt Lake City Police stated via Twitter that two employees are on administrative leave while the department investigates the incident. The statement did not reveal which two employees this refers to, but it does mention “the Salt Lake City police officer involved.”

The incident in question occurred on July 26. Salt Lake City Police Chief Mike Brown and Mayor Jackie Biskupski issued a joint statement on Sept, 1, following the release of the body cam footage and public outcry. Brown mentioned that the offending officer was suspended from the blood draw program and that policies have been updated.

“It is my sincere desire to get back to a very cooperative, respectful, and friendly relationship with our ‘brothers and sisters in white’ we work so closely with. Salt Lake City police officers have a very soft spot in our hearts for all medical professionals. We know that if we are ever hurt in the line of duty, it is their caring hands that will perhaps save our lives one day,” said Brown, in the statement.

The patient Wubbels was arrested for protecting is still in the care of the hospital. He is 43-year-old truck driver William Gray. He also serves as a reservist with police in Rigby, Idaho. While driving his truck he was hit head-on by a suspect being chased by police. The suspect died in the crash, but Gray was burned in the resulting fire. He was unconscious in the burn unit when police arrived.

As for why the police demanded the blood sample in the first place, despite not having a warrant, could have been out of fear of being held liable for the crash. The police may have been trying to obtain a sample, hoping to find traces of alcohol or drugs. The potential consequences of the truck driver regaining consciousness and pursuing legal action for his injuries could have created a bigger problem than pressuring a nurse, in the minds of Salt Lake City Police.