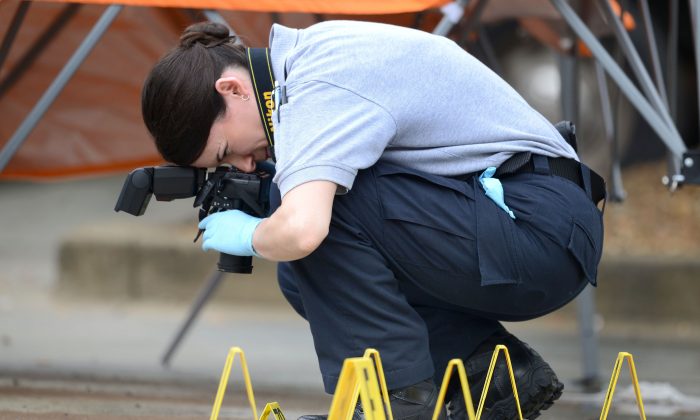 A law enforcement agent photographs the scene of a multiple shooting in Bristol, Tenn., on July 7. (David Crigger/The Bristol Herald-Courier via AP)
US

BRISTOL, Tenn. — The Latest on shootings along an East Tennessee highway (all times local):

The person killed when a man opened fire on a Tennessee highway was a newspaper carrier on her way to pick up papers for the morning delivery.

Bristol Herald-Courier publisher Jim Maxwell confirmed 44-year-old Jennifer Rooney was killed in the shooting. He called it a “senseless act of violence” that has stunned the small city on the Virginia border.

The Tennessee Bureau of Investigation says four others including a police officer were injured when a man opened fire at a Days Inn and at several vehicles on Volunteer Parkway. TBI spokesman Josh DeVine said the suspect was armed with at least two weapons and shot at responding officers, who returned fire, wounding him.

The Herald-Courier reported that Rooney was shot as she drove to pick up newspapers, then her vehicle careened over an embankment.

The Tennessee Bureau of Investigation says one person has died and four others including a police officer were injured when a suspect fired shots at a Days Inn and at several vehicles traveling along a roadway in East Tennessee.

TBI spokesman Josh DeVine said the suspect was armed with at least two weapons and shot at responding officers, who returned fire, wounding him. The suspect and the four people who were injured were taken to the Bristol Regional Medical Center.

Bristol police said in a statement that the shootings happened early Thursday in the city along the Virginia border.

DeVine said police are working “as aggressively, as quickly, and as carefully as possibly” to gather evidence and determine what happened.

My thoughts and prayers back down to Bristol, TN after this morning’s fatal shooting. https://t.co/H0pGKbECCF #stopthemadness

Police say multiple people have been injured and one person was taken into custody after a man opened fire on motorists traveling along a parkway in East Tennessee.

Bristol police say in a statement it happened early Thursday in the city along the Virginia border.

Bristol Police Chief Blaine Wade told media that responding officers found an active shooter at the scene, who began shooting at officers. Police returned fire, he said, and the man was shot and wounded. One officer also received a minor injury. The suspect and the victims were taken to the Bristol Regional Medical Center. The number of people injured by gunfire wasn’t clear.