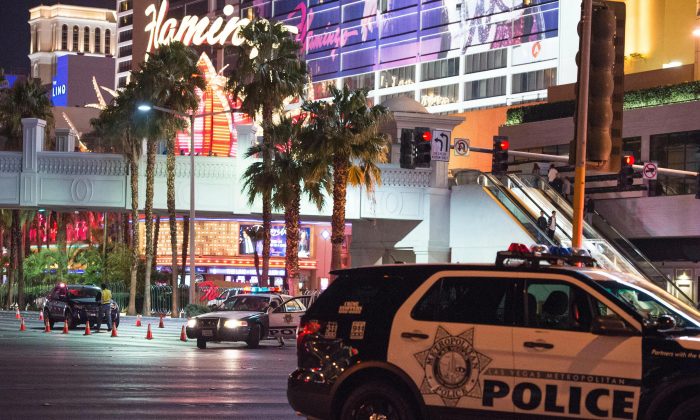 Police: Man Killed by Officers Was Holding Phone, Not Gun

LAS VEGAS—An attempted murder suspect who was fatally shot by Las Vegas police was holding a cellphone that was mistaken for a gun during the deadly confrontation, authorities said in a statement.

The shooting occurred Thursday as the officers were assisting U.S. marshals in arresting the man accused of multiple violent felonies in Arizona, including attempted murder. The name of the man has not been released.

Las Vegas police said in the statement issued Friday that the man had been under surveillance and fled from federal authorities who then called Las Vegas police for help in the search.

The man was found outside a home west of downtown. Police said his right hand held what they believed to be a firearm.

Officers told him to drop the gun and ordered him to stop when he began to move toward them. Police said two officers opened fire when he didn’t obey their commands. He was pronounced dead at the scene.

Police said the man was actually holding a cellphone.

Police Captain Matt McCarthy of the department’s office of Internal Oversight and Constitutional Policing said the officers shot at the man because the confrontation was in a residential area and involved a man wanted for attempted murder who they thought was holding a gun.

“The suspect did not listen, quickly began to advance on the officers, concealing his right hand, which the officers believed was holding a firearm,” McCarthy said in a video message that accompanied the police statement.

The two officers who shot him haven’t been identified but they are expected to be named soon in line with department policy.

It was the 16th shooting in which an officer opened fire or was shot at in 2015 in the Las Vegas area.