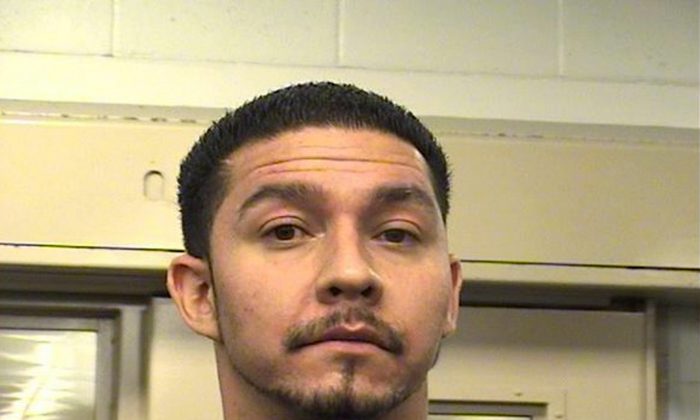 This photo provided by the Albuquerque Police Department shows Tony Torrez. Torrez was arrested Wednesday, Oct. 21, 2015 and acknowledged shooting 4-year-old Lilly Garcia while she was riding in the backseat of her father’s pickup truck with her 7-year-old brother a day earlier, police said. (Albuquerque Police Department via AP)
Crime and Incidents

ALBUQUERQUE, N.M.—A man confessed to shooting and killing a 4-year-old girl while arguing with her father on an Albuquerque freeway, police said, without offering more details on what led to the apparent road rage.

Tony Torrez, 32, was arrested Wednesday and admitted to shooting Lilly Garcia while she was riding in the backseat of her father’s pickup truck with her 7-year-old brother a day earlier, police said. He has been charged with murder, assault, child abuse and other crimes.

The children’s father picked them up from school Tuesday when someone in a Toyota opened fire on the family as they traveled down Interstate 40, Albuquerque’s main east-west freeway.

The father told authorities that he was trying to exit the freeway when a car forced him out of his lane, a police statement said.

“The two drivers exchanged words when Torrez pulled out a gun and shot at the red truck driven by Lilly’s father,” the statement continued. “Lilly was hit at least once in the head.”

The father pulled over and tried to give his daughter first aid as a bystander called 911.

In a roughly minute-long call released by police, a man alerts a dispatcher to a truck stopped on an I-40 median with “an adult holding an unresponsive child.”

Two nurses showed up and tried save the girl’s life, then an ambulance rushed her to the hospital, where she died, Albuquerque Police Chief Gorden Eden said.

Authorities quickly began pressing the public for tips, offering about $25,000 for information leading to the arrest of the shooter, who was driving a newer-model maroon or dark red Toyota Corolla or Camry with a spoiler on the trunk and dark tinted windows. The car also had a University of New Mexico license plate.

Police said an anonymous caller provided the name of a possible suspect Wednesday. With that information and tips from the community, detectives found the suspect and detained him without problems.

“This evening, Torrez confessed to investigators he was responsible for the murder,” the police statement said. He is being held on a $650,000 cash-only bond.

It’s not clear what led the incident to escalate, but the father told officers the shooting was the result of road rage.

At a late Wednesday news conference, Eden released details of Torrez’s arrest and information about an unrelated shooting that evening that left an officer critically wounded. A man was later arrested in that case.

Earlier, he described an exhaustive search for a suspect in the road rage killing.

Albuquerque officers “have not stopped or slept,” the police chief said. “Every officer in law enforcement in New Mexico is currently looking for the vehicle I described.”