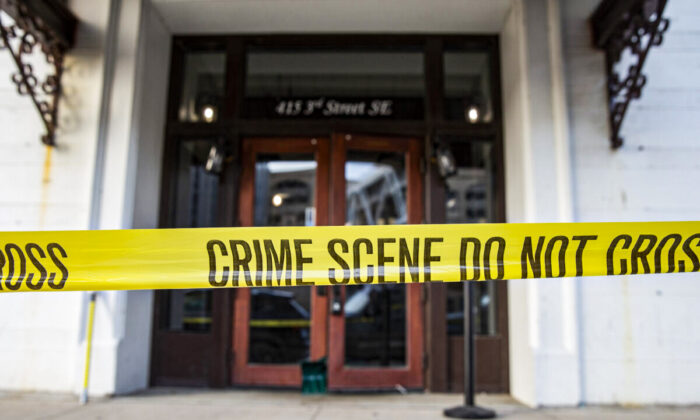 Crime scene tape blocks off the Taboo Nightclub and Lounge in Cedar Rapids, Iowa, on April 10, 2022. (Savannah Blake/The Gazette via AP)
US News

CEDAR RAPIDS, Iowa—Police have made an arrest in a shooting during a birthday party inside a crowded Iowa nightclub that left two people dead and 10 others injured.

Online court records Tuesday didn’t list information about Rush’s case, including whether he has a lawyer yet. He was being held in the Linn County jail and couldn’t immediately be reached for comment.

Police said the shooting at the Taboo Nightclub and Lounge in Cedar Rapids killed Michael Valentine, 25, and Nicole Owens, 35, both of Cedar Rapids. Ten other people also were injured in the shooting, which occurred around 1:30 a.m. Sunday during a birthday party for a friend of the victims.

Police said Sunday they believe one of the victims was the target of the shooting. Between 100 and 150 people were inside the club when the shooting happened, police said.

Police have not provided an update on the condition of those injured.