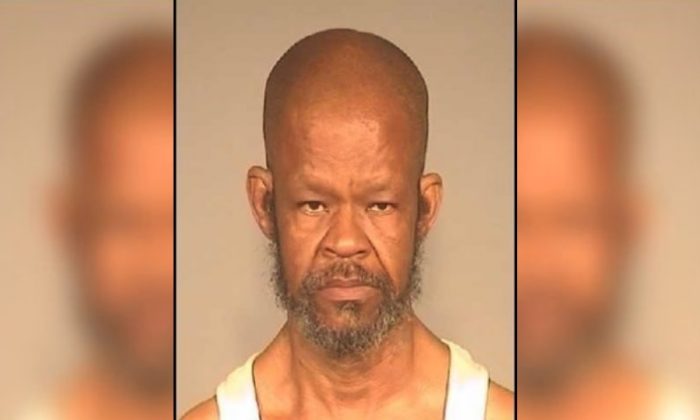 Philip Ray Lester, 61, was arrested and charged with assault with a deadly weapon in connection with an incident in Fresno, Calif., on March 26, 2019. (Fresno Police Department)
Crime and Incidents

A California man has been arrested after an altercation was caught on camera involving two men dueling in the middle of the street—one wielding a metal rod, the other swinging a baseball bat.

The incident took place in Fresno, California, on Tuesday, March 26, according to KSEE24 News.

The terrifying moments of a man beaten unconscious in a Central Fresno neighborhood were caught on camera: https://t.co/IyhiCtYwAe

One of the videos, published by ABC7 and courtesied to Depio Sanchez, shows two men squaring off in the middle of a residential street.

Police later identified the man wearing a white tank-top as 61-year-old Phillip Ray Lester, a homeless man. He had a baseball bat.

The other man, wearing shorts and sporting one black and one white shoe, clutched a long metal rod. He has not been identified.

The men circle and swing at each other, the video shows. At one point Lester grabs hold of his opponent’s metal rod and swings the baseball bat around several times, striking the man in the head.

After the man falls to the ground, Lester is seen swinging the bat several more times, striking the man as he lay on the ground.

A neighbor not identified by name told ABC7 he “saw a man lying on the ground; his head was cut open. There was blood on his head flowing onto the street.”

The same neighbor told ABC7 the area is a known problem spot.

“Unfortunately this is an intersection for homeless people and drug addicts,” the man said.

Police told ABC7 that the conflict erupted at a nearby homeless encampment.

“(Lester) went to the other homeless persons camping area began tearing down his tent,” Lt. Mark Hudson of the Fresno Police Department told the station. “That’s when the victim confronted him and that’s when the suspect began striking him with a baseball bat.”

Lester was arrested for assault with a deadly weapon.

The victim was treated for his injuries, said to be serious.

Homelessness in the United States

Around 65 percent of them were in shelters, while the remaining one-third were in places “not suitable for human habitation” such as abandoned buildings or the street.