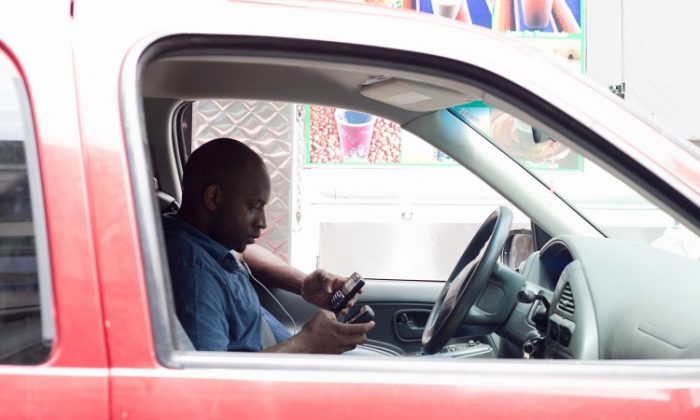 WEST BRIDGEWATER, Mass.—State troopers in Chattanooga, Tennessee, have been known to patrol in a tractor-trailer so they can sit up high and spot drivers texting behind the wheel.

In Bethesda, Maryland, a police officer disguised himself as a homeless man, stood near a busy intersection and radioed ahead to officers down the road about texting drivers. In two hours last October, police gave out 56 tickets.

And in West Bridgewater, Massachusetts, south of Boston, an officer regularly tools around town on his bicycle, pedals up to drivers at stoplights and hands them $105 tickets.

Texting while driving in the U.S. is not just a dangerous habit, but also an infuriatingly widespread one, practiced both brazenly and surreptitiously by so many motorists that police are being forced to get creative — and still can’t seem to make much headway.

“It’s everyone, kids, older people — everyone. When I stop someone, they say, ‘You’re right. I know it’s dangerous, but I heard my phone go off and I had to look at it,'” said West Bridgewater Officer Matthew Monteiro.

The National Highway Traffic Safety Administration estimates nearly 3,500 people were killed in crashes involving distracted drivers in the mainland U.S. and Puerto Rico in 2015, up from almost 3,200 in 2014. The number of deaths in which cellphones were the distraction rose from 406 in 2014 to 476 in 2015.

But many safety advocates say crashes involving cellphones are vastly underreported because police are forced to rely on what they are told by drivers, many of whom aren’t going to admit they were using their phones.

“You don’t have a Breathalyzer or a blood test to see if they are using their phones,” said Deborah Hersman, president and chief executive of the National Safety Council and former chairwoman of the National Transportation Safety Board. “Certainly, law enforcement can ask people, ‘Can I see your phone?’ but people can refuse, so they then have to get a search warrant.”

Forty-six states have laws against texting while driving that typically also ban sending or reading email, using apps or engaging in other internet activity. Fourteen states bar drivers from using hand-held cellphones for any activity, including talking.

While efforts to discourage texting have increased in recent years, the consensus among police, safety advocates and drivers is that the problem is only getting worse.

Everywhere they look, police see drivers staring at their phones.

“We did see one driver who had two phones going at one time — one in his left hand and one in his right hand, with his wrist on the steering wheel,” said Lt. Paul Watts, a Virginia state trooper.

West Bridgewater Police Chief Victor Flaherty said: “We’ve seen cars in trees. We’ve had two houses hit within three weeks. We had a car off the road 100 yards before it hit a parking lot.”

Enforcement is difficult, in part because it’s hard to prove texting violations in states that allow drivers to talk on hand-held cellphones.

“For the normal officer, in a car, it’s very difficult to tell if someone is texting or just using their phone in another way,” Flaherty said.

In Florida, texting is a secondary offense, meaning that even if police spot drivers texting, they can’t be stopped unless the officer sees another violation, such as speeding. Police gave out just 1,359 citations for texting in 2015.

Drivers have also become sneakier. Instead of resting their phones against the steering wheel, they hold them down low to make it more difficult for police to see what’s going on.

“Some people call it the red-light prayer because their heads are bowed and they are looking down at their laps with a nice blue glow coming up in their face,” said Chris Cochran, a spokesman for the California Office of Traffic Safety.

In New York, some lawmakers proposed equipping police with a device called the Textalyzer. An officer investigating a crash could use it to check the driver’s phone for any activity before the wreck. The idea ran into legal objections and has not been put to a vote.

Fines for first offenses range from $20 to $500. In some states, such as New York, drivers caught texting also get points on their driving record, which can lead to higher insurance rates.

Some states have increased the penalties, including Louisiana, which raised its fine for first-time offenders from $175 to up to $500. But safety advocates have focused more on pushing for better enforcement, said Jonathan Adkins, executive director of the Governors Highway Safety Association.

Surveys show that most drivers know the dangers of using their phones while driving but that many do it anyway.

Jay Winsten, director of the Center for Health Communication at Harvard’s School of Public Health, is working on a major media campaign against distracted driving. The center spearheaded the successful 1980s campaign that promoted the use of designated drivers to combat drunken driving.

In addition to warning drivers not to use their phones, the new campaign will promote defensive driving, urging motorists to watch out for distracted drivers.

“We’re trying to get the attention of people by not talking to them as the villain, but rather as the other guy,” Winsten said.

In the meantime, Officer Monteiro can’t pedal his bike fast enough to get to all the drivers he sees texting. One day, he caught a teenager playing Pokemon Go on his phone while driving. Another time, he caught a woman watching YouTube videos. Both got slapped with $105 tickets. The teenager also faces a 60-day suspension of his license.

Vinny Fiasconaro, 30, got a warning after Monteiro saw him using the calculator on his phone at a stop sign. Fiasconaro shook his head sheepishly.

“I was in the wrong,” he said. “You should be focusing on the road. You should pay attention.