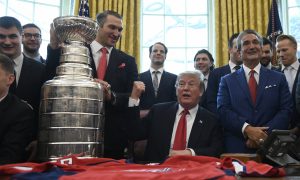 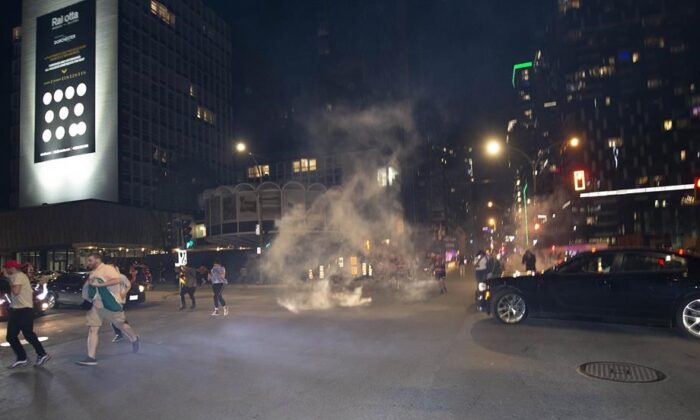 MONTREAL—Rowdy fans outside the Bell Centre were already celebrating—cheering and launching fireworks—before the Montreal Canadiens beat the Vegas Golden Knights to advance to the Stanley Cup final for the first time since 1993 on Thursday.

Artturi Lehkonen scored in overtime as Montreal edged Vegas 3-2 to take the third-round series in six games, with the goal setting off wild scenes of unbridled joy both inside and outside the Bell Centre.

Outside the arena, where mobile internet connections were poor, few people appeared to know who had scored the game-winning goal, only that their team had won, as fans hugged each other, danced in the streets and chanted “olé, olé, olé” and “go Habs go!”

Following the game, fans were temporarily forced to stay inside the arena due to safety concerns as the streets in the nearby area became raucous.

Steven Bergeron, a fan celebrating the victory, said being tear gassed without warning took some of the joy out of the celebration for him, adding that most of the fans outside the arena were just having a good time.

“Some people were doing some bad things but everybody was just jumping and they started shooting it at us,” he said. “I thought it was another fire work and I had something in my eyes but when I saw everybody start running, I knew it was the cops.”

Still, he said, watching the Canadiens win was “pretty sick.”

Couture said there had been several arrests, notably for assault and mischief but that police would not have the total number until Friday morning. He said police had also ticketed some people for violating municipal fireworks regulations.

Thursday was also Saint-Jean-Baptiste Day in Quebec, and there was more to celebrate than usual as the Canadiens now look to bring the sport’s Holy Grail back over the border for the first time since Montreal’s triumph 28 years ago against the Los Angeles Kings.

“It’s amazing for the French Québécois people, it’s amazing for Quebec,” to see the Montreal Canadiens go to the Stanley Cup final, said Claude, a fan who declined to give his last name.

Canadiens assistant coach Luke Richardson opened his post-game press conference with a message to those outside the arena.

“I know it’s a little crazy outside the Bell Centre. But we hope everybody’s enjoying themselves and has a great time, and especially with Saint-Jean-Baptist Day, and it’s such a special day to celebrate. But let’s make sure we all celebrate responsibly and get home safe.”

For some fans, the timing of the victory—coming as restrictions on social gatherings are being relaxed—added to the joy.

“It feels good just to be around a bunch of people,” said Tony Camelio, who was celebrating downtown. He said he wasn’t even born the last time Montreal made it this far in the playoffs, but had purchased a new Canadiens sweater for the occasion.

“I’m feeling good, they just won, they’re going to the finals,” he said.