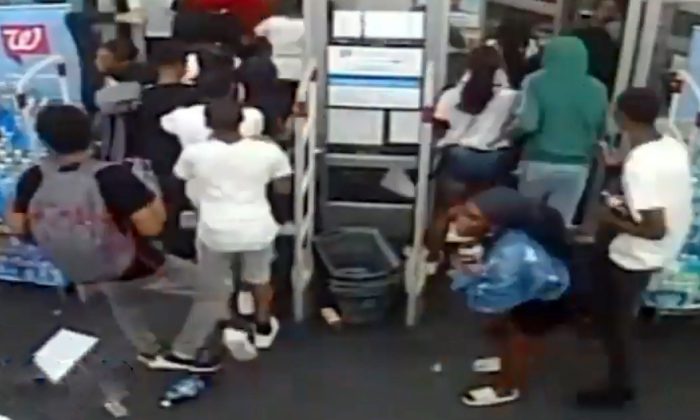 About 60 people are wanted for questioning after the large group raided a drug store in Pennsylvania on July 4, say police.

The Philadelphia Police Department is searching for the male and female suspects, including teens, who could be seen on video storming the Walgreens store at about 10 p.m. local time in the Graduate Hospital area.

Police released the surveillance video footage showing dozens of youth crowding through the store entrance, running through shopping aisles, knocking health and beauty items off the shelf, removing entire trays of products, and throwing products across the store, before dashing back outside.

“Once inside, the group ran around knocking items off of the shelves and running out of the store without paying for merchandise,” police wrote on YouTube. “Some members in the group threw merchandise at store employees, resulting in injuries.”

The group is also accused of hitting and injuring a 46-year-old man with a glass bottle, CBS3 reported.

Philadelphia police are investigating after several teens steal items and throw ice at Wawa customers. @KimberlyDavisTV has the details. https://t.co/oMVye1tBLd

Philadelphia Police Captain Sekou Kinebrew confirmed a cashier who tried to intervene was hit on the head with the bottle, according to the Associated Press (AP).

“About 60 juveniles walked in … and began removing things from the shelves, destroying property inside the store. The cashier attempted to intervene and some heavy item – I believe it was a bottle – was thrown at him, striking him in the head.” https://t.co/O7BOJ2yZvY

The stolen items and damaged property are expected to cost between $6,000 and $7,000 in damages for the store, Kinebrew said.

The group was spotted earlier stopping road traffic while running along South Street, a busy thoroughfare with several shops and restaurants, according to AP.

The same group is also suspected of vandalism to other nearby businesses on Independence Day. Witnesses told CBS3 the group was originally from Penn’s Landing and grew in numbers as it traveled up South Street.

What kind of mess is this? Philadelphia police have released surveillance video showing a group of teenagers damaging a Walgreens pharmacy on July 4. – @JoeSotoRadio https://t.co/ZiNC6TjUyV

Anyone with information about the incident and suspects is invited to contact Detective Duffy #741 at the South Detective Division by calling 215-686-3013/3014 or text message 773847.

“All tips will be confidential,” police said.