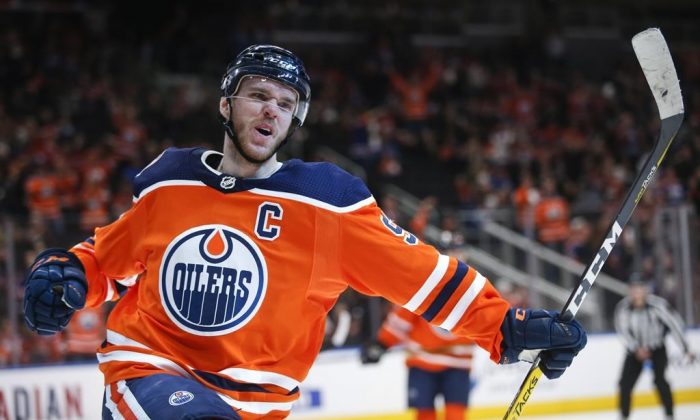 EDMONTON—Police have laid charges against a man accused of forging the signature of Edmonton Oilers star Connor McDavid on what are believed to be authentic team jerseys, then selling them to score big profits.

They say a 23-year-old man contacted several people through Facebook in April 2018 and claimed he was employed by either the Oilers Entertainment Group or Edmonton sports memorabilia retailer Pro Am Sports, and was selling autographed McDavid jerseys.

Investigators believe he sold two sweaters bearing phoney signatures to someone for $1,400.

“Connor McDavid himself did confirm through the Oilers organization that (the signature) is not his,” Const. Derek Burns, one of the investigators on the case, said Thursday.

It’s also alleged that the accused proposed a scheme in which a significant return could be had for investing in the superstar-signed jerseys, which buyers were supposedly lined up to purchase. Police say one person was defrauded of $23,000 earlier this year.

Burns said five people have laid complaints so far about losing money, but added there could be others. Police are asking anyone who has contacted the accused and bought a jersey to come forward.

Police have charged Chandra Vinesh Singh—also known as Vinesh Singh or Vinny—with two counts of fraud, another two of forging documents and one of false pretence. He is to appear in court Sept. 23.

They are also reminding people to be cautious when buying merchandise from non-licensed vendors and individuals online, a sentiment echoed by Jack Cookson, president of Pro Am Sports.

He noted that the standard price for an authentic top-quality jersey signed by McDavid is $1,599.95.

Tim Shipton, senior vice-president of the Oilers Entertainment Group, said in a statement issued through police that “this is a good reminder for our fans to always go to trusted sources.”