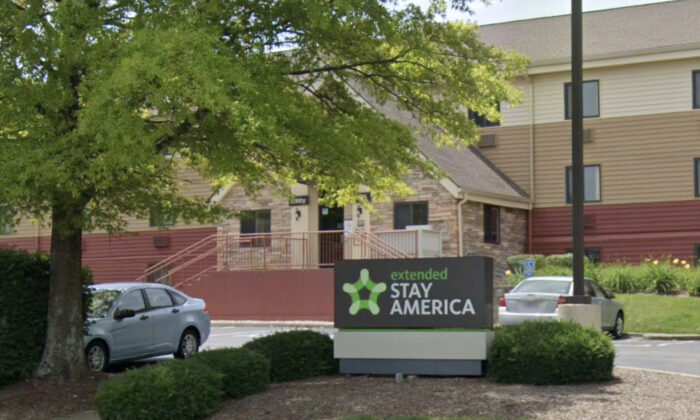 The Extended Stay America hotel in Lexington, Ky., in June 2019. (Google Maps/Screenshot via The Epoch Times)
Crime and Incidents

LEXINGTON, Ky.—A gunfire exchange between a suspect who died and a police officer who was wounded led to an hourslong standoff at a central Kentucky hotel, officials said Friday.

Two officers responded late Thursday to a call from the Extended Stay America in Lexington on a report of trespassing and delayed assault, a statement from Lexington Police said.

The suspect, later identified as Joshua Hagans, 40, refused to answer the door when police arrived, but the officers gained entry to the room and Hagans fired at them, the statement said. The officers returned fired and backed out of the room, but the suspect stayed and refused to exit, police said.

One officer was wounded and taken to a hospital for treatment, officials said.

Meanwhile, police requested a crisis negotiation unit, which tried for hours to make contact and negotiate with the suspect. Police said officers were able to enter the room again around 4:30 a.m. Friday and found him with a gunshot wound. He was taken to a hospital, where he was pronounced dead, police said.

On the same night, two Georgia deputies were killed while serving a warrant in a suburb near Atlanta and two suspects were taken into custody, authorities said.