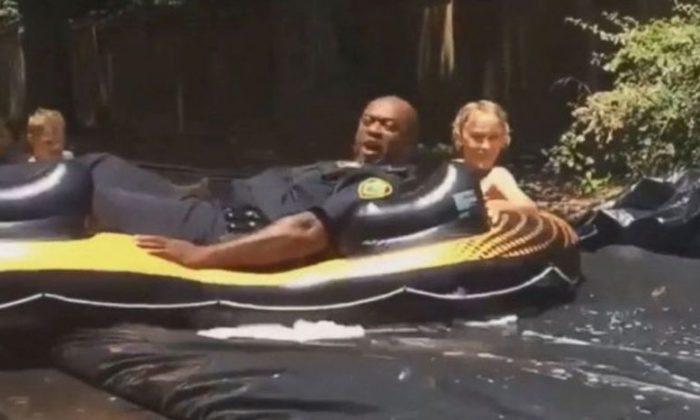 Police Join in on Neighborhood Slip-and-Slide

Police showed up to investigate a complaint at a giant slip-and-slide party in Asheville, North Carolina—but it didn’t go exactly as the caller imagined.

Asheville Police arrived at the scene, but instead of issuing a citation, they made an unexpected move: they took a ride down the slide themselves, all captured in a now viral video.

“Don’t worry, we’re not here to break up your fun,” officer Carrie Lee told a group, CBS News reported. “We received a call about the road being blocked—so here we are.”

They then determined the water slide was fine. “We looked at it and determined it wasn’t really an issue,” Lee added. “So the first thing I said, I said I’m not here to break up your fun.”

Lee can be seen using a trash bag as her raft as Officer Joe Jones slides down in an inner tube, joining a young boy.

“I thought I was going to be able to get out of it, because I’m too big to fit in a trash bag,” Jones told CNN. “But then when the kids pulled out this big raft … I had no choice.”

“We for sure did not expect that,” Asheville resident Katlen Joyce Smith told CBS. “She went first in the plastic bag—and joked, ‘This is going to make such a good body-cam video.'”