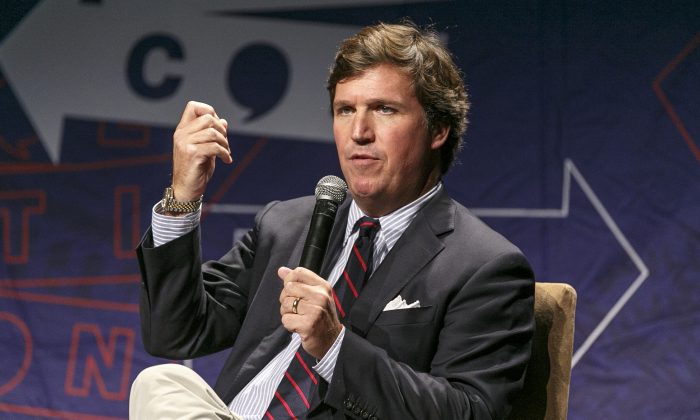 A group of far-left extremists went to Carlson’s house on Nov. 7 and started shouting. Some pressed the doorbell and one, according to the wife of the Fox News host who was home at the time, tried to break down the front door.

She thought her home was being broken into and rushed into the pantry, locked herself in, and called the police, according to Carlson. Around 20 harassers were at the scene, where they also spray-painted an anarchy symbol on the driveway.

Carlson was at Fox’s Washington office at the time.

Now the police are investigating the so-called protest and vandalism as a possible hate crime, the Metropolitan Police Department told the Associated Press.

The police report notes there were no arrests but officers confiscated several signs and list the incident as a “suspected hate crime” on the basis of “anti-political” bias.

(the same people who went after Ted Cruz at a restaurant while he was eating dinner with his wife) pic.twitter.com/k3JJYOjS2X

The department said that “defacing private property” is not an expression of free speech and the First Amendment.

“We will work to hold those accountable for their unlawful actions. There is currently an open criminal investigation regarding this matter,” the statement said.

Carlson hosts one of America’s most popular cable television shows, with millions of viewers tuning in each night. He frequently supports President Donald Trump’s policies, including border security and combatting illegal immigration.

The group, Smash Racism DC, posted videos of them at Carlson’s house on Twitter, including with one the caption: “Tonight, we remind you that you are not safe.”

Their chants included “Tucker Carlson, we will fight!” and “We know where you sleep at night!” In another chant, the group said: “No borders! No walls! No USA at all!”

People feel like they have to shut up. That they can't say what they think because they'll be punished. This has a chilling effect on everyone's ability to speak and think freely. pic.twitter.com/YOAtTAhMNc

Carlson told Fox that the group broke his oak front door and that one of them was caught on security footage mentioning a pipe bomb.

The couple has four children, none of whom were home at the time.

Carlson told Fox he doesn’t mind being confronted in public but told the Washington Post that this time the radicals had gone too far.

“I don’t think I should be threatened in our house. I think I should fight back, and I plan to,” he said. “I’m not going to be bullied and intimidated.”