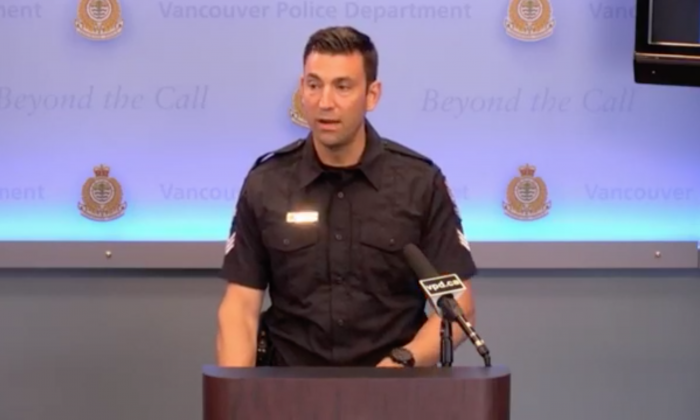 Sergeant Jason Robillard of the Vancouver Police Department speaks to the press on June 13 about the third case of virtual kidnapping in Canada this year. (VPD)
News & Commentary

Vancouver police are investigating the third case of “virtual kidnapping” this year and are raising awareness about the crime to the public.

Virtual kidnapping is when someone is made to look like they are kidnapped when they are not, for objectives such as extorting money.

Vancouver police say this most recent case, a young woman in her early twenties from China who was studying in Canada on a student visa, received a call from a Chinese police number.

The number was an actual Chinese police number, but the Vancouver police say this is a common practice among fraudsters called “spoofing,” whereby a phone number appears to come from somewhere other than its actual origin.

The person on the other end of the phone pretended to be a police officer calling from China, and the fraudster convinced the girl that she was implicated in a money laundering investigation in China. The suspects told her she had to transfer Chinese funds to cover police and court costs.

The victim paid through a Bitcoin ATM.

Then the suspects demanded more money and threatened her with arrest. They convinced her to provide them with “compromising photos,” which they sent to her family in China. The suspects then demanded ransom money from the family, using the photographs to create the illusion that the young girl was kidnapped.

Her family paid the ransom.

There was no face-to-face contact between the victim and the suspects, and the girl wasn’t physically harmed, said Sergeant Jason Robillard of the Vancouver Police Department in a June 13 press conference.

But damage has been done.

“These deplorable crimes are having a huge impact on these young, trusting students, and their families,” he said. “We need to make sure people are aware to prevent them from continuing.”

This year so far there have been three cases of virtual kidnapping, and two additional attempted cases. Police say the cases are similar: The suspect will first target a victim and then walk them through a scheme. So far, the victims have collectively lost hundreds of thousands of dollars.

Robillard said police do not know how the victims are chosen, but that the suspects all appear to be located outside of Canada. Canadian police are working with Chinese officials and other police agencies.

The police believe there may be more of these incidents that have not yet been reported.

The Vancouver police have an important message for students from China, who may be unaware of how much or little authority Chinese police have in Canada, and are reminding them that the Canadian Police are here to protect them.

“We want to remind all foreign students that the Chinese police will not arrest you in Canada, and if you are confused or scared, please reach out to your local police department in Canada. We are here to help.”