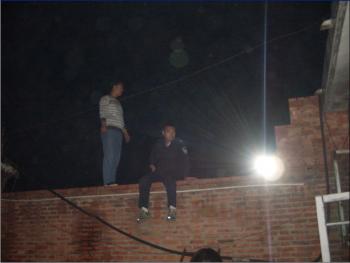 A uniformed man identified as Zhang Songwei, deputy head of the Yinliu Police Station, sits on a wall at night outside the girls' home. (Minghui.net)
China

By Ethan Yang
Print
Police in the northeastern Chinese city of Tianjin have intimidated three young girls whose parents practice the Falun Gong meditation system, according to a Web site which carries first-hand reports of such cases in China.

According to Minghui.net, an online forum run by Falun Gong practitioners, the three girls named Xiao Jing, Xiao Yan, and Xiao Jiao live alone after their parents were arrested for their belief in Falun Gong.

The report posted on Oct. 4 says that on Sept. 29 at around 4 a.m., a group of police from the Yinliu Police Station in Tianjin’s Ji County began beating on the girls' door, saying they would enter and search the house.

Several police climbed a wall surrounding the property. The report provides photos of a uniformed police officer and another man in plain clothes standing on a wall at night; the photo identifies the uniformed man as Zhang Songwei, deputy head of the Yinliu Police Station.

The girls refused to open the door and called for neighbours to help. Eventually, the police left.

However, during the holiday period surrounding National Day starting Oct. 1, groups of up to 10 police visited their house numerous times, climbing the walls and beating on the door.

The report has a message it says the three girls posted in the streets, calling for help.

“We are only three girls. We don’t have the ability to defend ourselves,” it reads. “We don’t know if they will come again. We three girls are really without helping hands. … We need your help! Thank you.”

Falun Gong is a spiritual discipline based on the principles of truthfulness, compassion, and forbearance, which was practiced by tens of millions in China before it was outlawed by the ruling regime in July 1999. Thousands of Falun Gong practitioners have since been tortured to death and hundreds of thousands are held in labor camps throughout China.