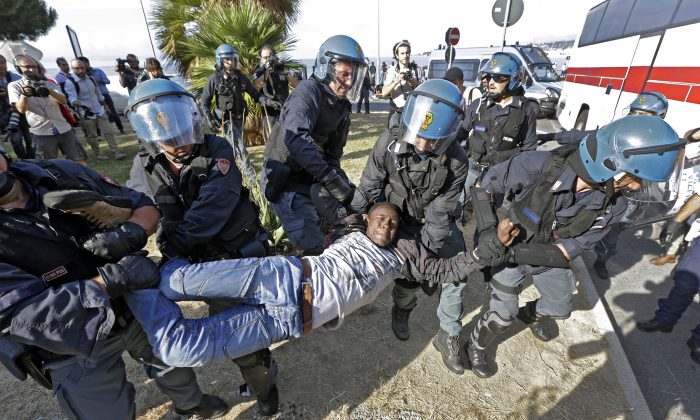 A migrant is removed by Italian police at the Franco-Italian border near Menton, southeastern France, Tuesday, June 16, 2015. Some 150 migrants, principally from Eritrea and Sudan, have been trying since last Friday to cross the border from Italy but have been blocked by French and Italian police. (AP Photo/Lionel Cironneau)
Europe

VENTIMIGLIA, Italy— Italian police in riot gear forcibly removed a few dozen African migrants on Tuesday who had been camping out for days at Italy’s Mediterranean border with France in hopes of going further north.

Some of the migrants protested, grabbing onto signposts, while others had to be carried off by their legs and arms — a violent scene that Italy used to show the rest of Europe that it needs to do more to deal with the continent’s migrant crisis.

“We are human beings. We are not animals,” said Saddam, a Sudanese migrant who watched the police operation Tuesday at the Ventimiglia border crossing and only gave his first name. “I know we are black and we are come from Africa, but we are still humans.”

Migrants on the rocks jutting out into the sea were left alone, with police apparently unwilling to move into that more treacherous location. The rest were loaded onto a Red Cross bus and taken to the nearby train station.

It wasn’t immediately clear why the Red Cross allowed their bus to be used for the police operation.

The would-be refugees, mostly from Sudan and Eritrea, had camped out for five days after French border police refused to let them cross. They had refused to leave, saying they want to find family members elsewhere in Europe.

Under EU rules, would-be refugees are supposed to be fingerprinted and apply for asylum in the first EU country where they land. Many new migrants, however, prefer to slip through Italy without being officially registered so they can head further north where they might find better job opportunities while their asylum claims are being processed.

Italian Interior Minster Angelino Alfano, arriving Tuesday at an EU interior ministers’ meeting in Luxembourg, said the scenes from Ventimiglia were proof that migrants don’t want to stay in Italy.

Italy, which has borne the brunt of rescuing migrants at sea and providing initial assistance to them, is demanding that other European countries take in the migrants and let them apply for asylum elsewhere. The country has seen 54,000 migrants land so far this year, according to refugee agencies. But many other EU nations are resisting an EU proposal to help.

In response, France has reinforced its border controls over the past few weeks.